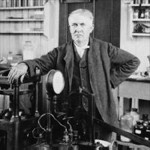 This is the eighth in a series of articles looking back over ‘Geek Facts’. Today’s topic is the ‘Geekiest Person’.

The geekiest person was Thomas Alva Edison with 9, or about 2%, of the Geek Facts. Being the prolific inventor that he was, this came as no surprise. Honorable mentions go to Alexander Graham Bell (4) and Albert Einstein (3).

• August 31, 1897, Edison received a patent for the Kinetoscope, a device for producing moving pictures.

• May 24, 1915 – Edison invented the telescribe to record telephone conversations.

According to the National Park Service,

Edison earned 1,093 United States patents, a record number for one person that still stands. He also earned at least several hundred foreign patents from Great Britain, France, Germany and other countries. Most foreign patents were similar to the American ones.

You can’t get much geekier than that!