Easy BCD is a free (for non-commercial use) software to help users easily set up multi-boot environments. If you  search for information across the net on how to dual boot you’ll find plenty of references to and recommendations for EasyBCD. What follows is a summary of my experiences with EasyBCD and why it did not suit my particular requirements.

Ever since Vista was first released I’ve maintained two different operating systems installed on separate internal hard drives. This scenario provides me with a very quick and easy route to get up and running again in case of a disaster. Plus, running the two most current operating systems on a single desktop computer has always been the most economical way for maintaining hands on access to relevant material – assisting users, providing guides and screenshots, etc.

I started off with an XP/Vista system, changing boot preferences in BIOS each time I wanted to load a different operating system. Although it didn’t really involve a lot of additional time, I was soon thinking that there must be simpler method, and that’s when I started investigating alternatives and first came across EasyBCD.

As the name suggests, EasyBCD makes it very simple for users to set up a dual boot scenario – just select an operating system and associated hard drive to add entries into the boot menu: 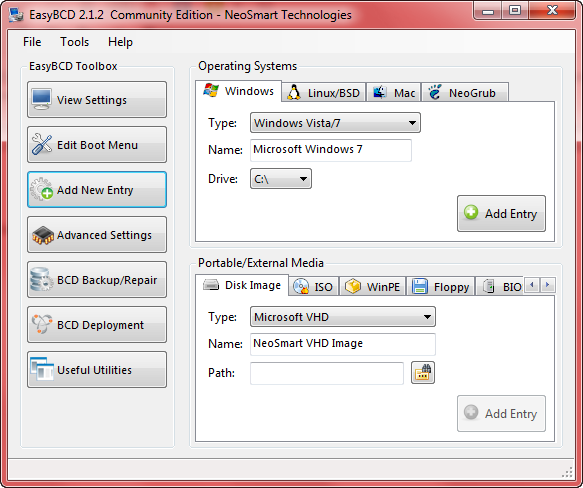 When you’ve finished, a summary, which is accessed via the “View Settings” button, displays exactly what operating system are included: 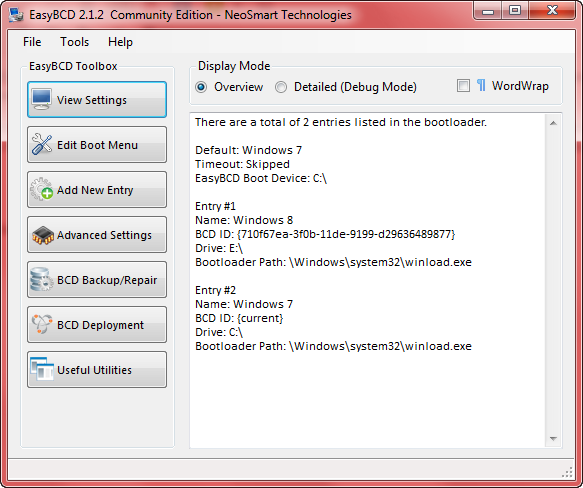 Changing the default timer and operating system is also a very simple process. accessed via the “Edit Boot Menu” option: 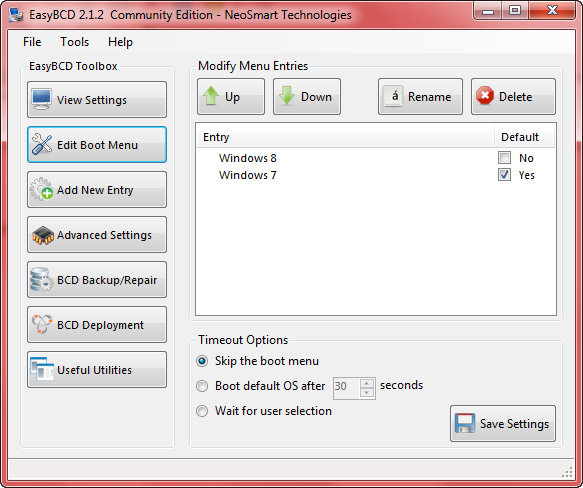 Everything about EasyBCD is designed to make setting up and manipulating multi-boot systems as simple as humanly possible, and it all seemingly works very well.

EasyBCD – The Not So Good 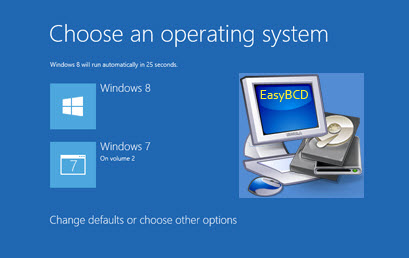 I am currently running Windows 7 and Windows 8.1 in a dual boot system utilizing EasyBCD. I came across the first aberration some time back when I wanted to utilize the Windows 7 recovery disc, it booted fine but refused to recognize any operating systems. Next I tried accessing the Repair feature from an original Windows installation disc, same thing, no operating systems listed. I am in the habit of creating regular image backups so, at the time, decided it was no big deal and I could always fall back on the image backups if things got really bad.

Then, only last week, my Windows 7 hard drive failed… disaster! I was right in the middle of my normal daily routine so it was imperative to get up and running again as soon as possible… no problem, I’ll just boot into Windows 8.1. Ha Ha!

Apparently, after setting up the dual boot scenario with EasyBCD, the two operating systems are not independent of one another at all with BOTH relying on the same bootloader, which was, in my case, on the failed Windows 7 drive. So, I now find myself unable to boot to either operating system, even though the Windows 8.1 installation is in perfect working order… apart, of course, from the missing bootloader. I guess I didn’t think it through properly and should have realized this would be the case.

I’ve tried every method known to mankind to restore the original Windows bootloader; all the recommended ‘bootrec’ and ‘diskpart’ commands, all to no avail. In the end, after connecting a brand new internal hard drive, I restored a Windows 7 image which, of course, also included the original EasyBCD bootloader, so I was then able to boot to either operating system once again.

I realize I could have re-installed one or both of the operating systems but that was always a very last resort. Anyone who’s ever been there, done that, knows just how much of a hassle that entails. For me anyway, the easiest/shortest route between A and B is generally the preferred option.

I haven’t given up on restoring the individual Windows bootloaders just yet, still trying, but it can be a long winded process when these well publicized methods keep failing and you need to be continually restoring images in order to get back to where you started.

Finally, I must make it clear that, while I am no dunce in this area, I am certainly no expert either. So, if I am missing something obvious or have got something horribly wrong, feel free to correct me via the comments.

7 thoughts on “Dual Boot and EasyBCD”