A one man revolution 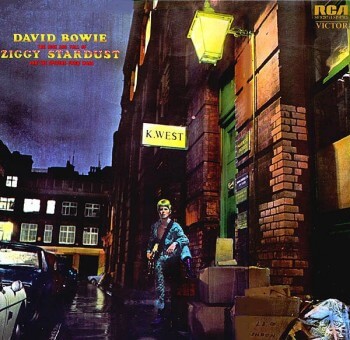 I first became aware of David Bowie in the early 70s whilst serving the last three years of a twelve year boarding school sentence at the age of fourteen when, to have the album was a passport to popularity; a kind of currency if you like. Space Oddity came a little late to me, but when Ziggy Stardust came along in 1972, it awoke the lurking rebel in me and my circle of friends. We regarded Bowie as a curiosity at first, but as we listened, his personality and the personas he created fired our imaginations. Writing this now, 40 years on, I can’t remember being shocked at his androgynous appearance; it pretty much slotted in perfectly with those pubescent years of discovery and seemed to compliment those confusing years with a kind of affirmation that all was finally well in the world. We’d found Ziggy and he shared our angst. 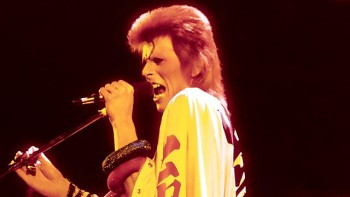 Once every couple of weeks the local barber would visit the school and believe me, he wasn’t popular. Many of us would hide or go missing rather than face the humiliation of having our Bowie hairstyle mutilated. It was personal and the barber knew it, giving us no sympathy, probably because either he’d never heard of Ziggy or he didn’t want his own sons looking like that and set about his task with relish. Some boys had the nouse to bribe him with pound notes, which sometimes worked or he took the money and scalped you anyway. Still, we always had the school holidays to grow it back, after which my Mum and sisters might say ‘Are you trying to look like David Bowie Marc?’ and I’d blush profusely, replying ‘I don’t know what you’re talking about.’ 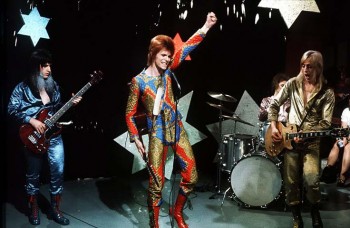 When you live in an institution such as we did, you need escape, if not physically then spiritually, so Major Tom, Ziggy Stardust and Aladdin Sane became our co-conspirators, our alter egos if you like. Transistor radios were permitted, but not in the dormitories, which of course we ignored. Lights out, radio under the pillow, catching the Radio Luxembourg top 40, waiting for them to play Starman or Life on Mars and escaping, albeit briefly. I have no doubt that Ziggy and The Spiders helped me survive the savagery of the British boarding school system, yet helped me take something from it too. And isn’t it odd how songs pinpoint you at a certain moment in time? I can read a passage from The Lord of The Rings and suddenly I’m hearing The Man Who Sold The World or Five Years like they’re etched in my consciousness. Was I influenced by David Bowie? Of course I was, but not from a career standpoint. I’m not an artist or a rock star whose career has been shaped by the era, but I am a writer and Bowie’s lyrics were so often magical fantasy and totally fearless, going places where few writers had been before. His words flowed with perfect cadence and you just knew he’d written them in the moment, straight from his mind, maybe on the back of a cigarette packet. The best and real kind of writing.

Bowie was a great observer of life, he had a kind of osmotic personality where small bits of the world would stick to him and he’d take all those bits, throw them together and create a thing of beauty through those newly arranged words. Many have referred to him as a magpie, a collector of things who borrowed snippets of great works, poems and other people’s songs to create a different view, a kaleidescope if you like. But aren’t we all collectors of things? I know that when I write, it’s a little like a camera shutter opening and closing at various stages on life’s way and if I’m lucky enough I’m able to reach back and frame those moments into something coherent, yet enjoyable on the eye. Maybe that’s what I learned from David Bowie. 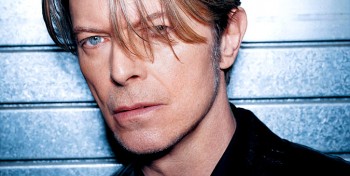 As I write this, there are doubtless millions of fans like me writing their own words about the man who gave them so much, about how they woke up this morning and learned the news, yet not wanting to accept it, let alone believe it. Some might say that a light has gone out in the world or that we are a little poorer without him. For my part, we are a little richer and the world is a little brighter for having been touched by such a talent and I’m sure I’m not alone in that view. In fact, I have a life-long friend I’m still in touch with, after having been thrown together at a previous institution in 1962 and later during the Ziggy years. He and I were able to interpret the words of Bowie our way, kick against the system, sing the songs, survive and release ourselves through writing and downright rebelliousness, largely through Bowie. Why?

Because he was one of us.