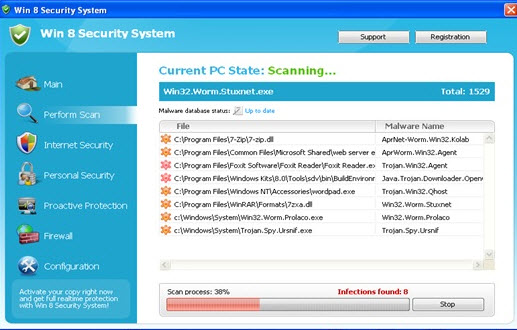 Well that didn’t take long, did it. Windows 8 hasn’t even been officially released yet and already the devious cyber-crooks are taking advantage of the name. According to a McAfee security bulletin this latest rogue anti-virus, calling itself ‘Win 8 Security System’ was first detected around the end of August.

For the uninitiated; rogue anti-virus typically infects a user’s system, then attempts to scare its victims into actually purchasing the software by issuing fake security messages. It pretends to scan the computer, displaying grossly exaggerated numbers of nonexistent threats, then tells victims they need to buy the full version in order to fix these false errors. 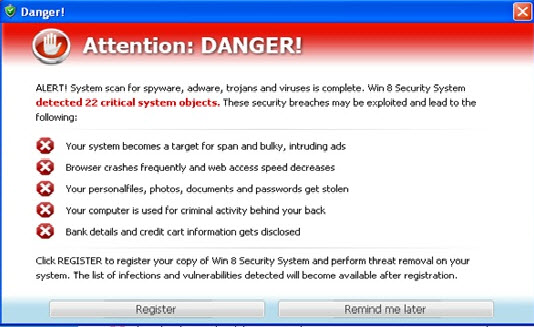 Win 8 Security System is quite similar to fake AV product Windows Ultra-Antivirus and is extremely aggressive and hard to remove.

To help protect itself, Win 8 Security System comes with a rootkit and creates a plethora of registry elements and values, as well as half a dozen files. This makes it very risky to remove manually as the system can be permanently damaged by any mistakes made during the removal process.The McAfee report recommends that manual removal should only be attempted by experienced users such as IT specialists or highly qualified system administrators. Other users are advised to utilize installed security software for removal.

This type of malware is generally delivered via infected websites; always keep your resident AV and other security software up-to-date and never click on banners offering “free” scans. If a message from any unknown anti-virus software should popup on your screen; disconnect from the internet straightaway, do NOT click anywhere on the message, and immediately perform full scans through your installed security software.