Programs may come and programs may go but there is one piece of software which has always been an essential part of most user’s setup and remains so to this day… antivirus. Sure, you may come across the odd comment from someone expounding on how they don’t use or need antivirus but that’s not a stance I agree with, certainly not for the vast majority of internet users anyway.

Over the years, the big 3 have been at the fore in the free antivirus stakes, Avast, Avira, and AVG. About 4 months ago I uninstalled my long time favorite, Avast, and installed Avira Free Antivirus. No need to go into the reasoning here, suffice to say that I was getting a little fed up with some of Avast’s tactics with the latest versions.

Anyway, four months on and I am happy to report that I am very satisfied with Avira’s overall performance. Avira’s free package is not quite as comprehensive as the other major contenders, there is no email protection included for example, but Avira’s superior core detection rates more than make up for any missing periphery. Besides, Avira will still spring into action whenever the user attempts to open anything malicious. 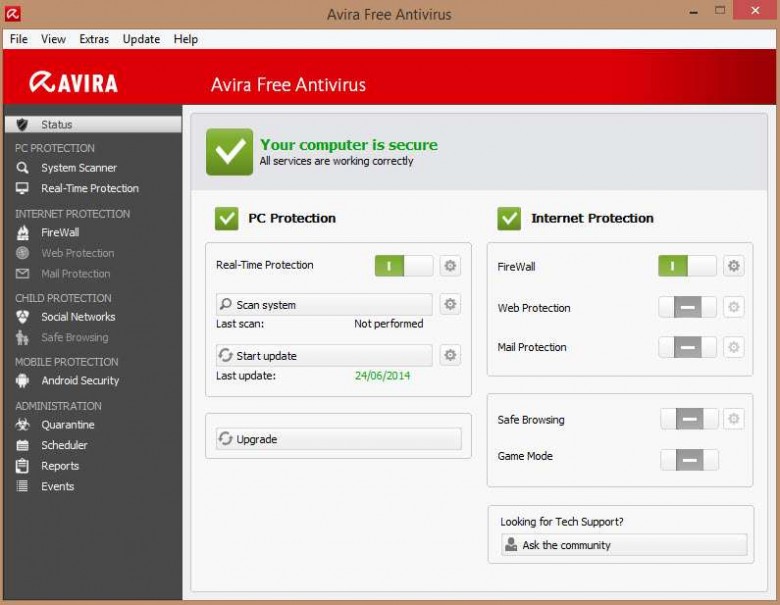 Note: The “Firewall” referred to in the above screenshot is actually Windows Firewall and not an additional third party firewall provided by Avira.

Green buttons denote installed components and grey buttons denote features which are available only in Premium editions – with the exception of Web Protection, which is available as a separate browser add-on and accessed from a popup initiated by left clicking Avira’s system tray icon: 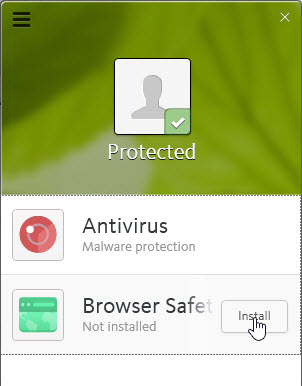 This is actually a good thing because it allows users to choose whether to install the Browser Safety feature or not. Avira’s Browser Safety add-on is available for Firefox and Chrome and is actually a pretty useful addition, encompassing three key areas of browser security and privacy:

Real-Time Protection is provided per medium of a combination of traditional definition database plus Avira Protection Cloud detection technology, which Avira claims detects 99.99% of all malware. 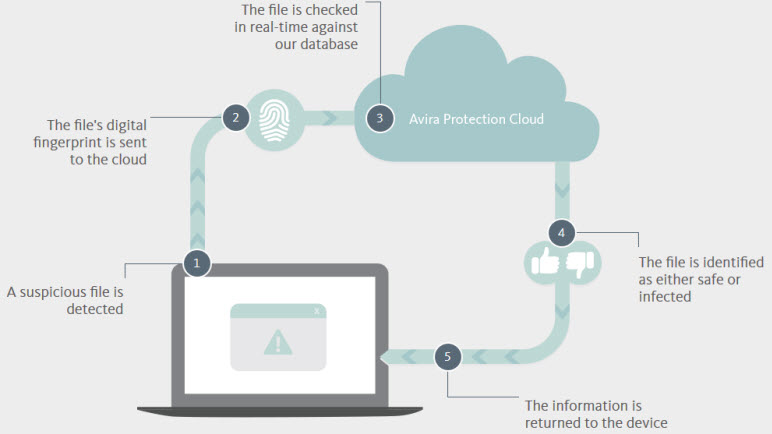 It’s all pretty simple stuff configured for optimum protection right out of the box but if you care to dig down through the menus you’ll find plenty of information and several settings to fiddle with. 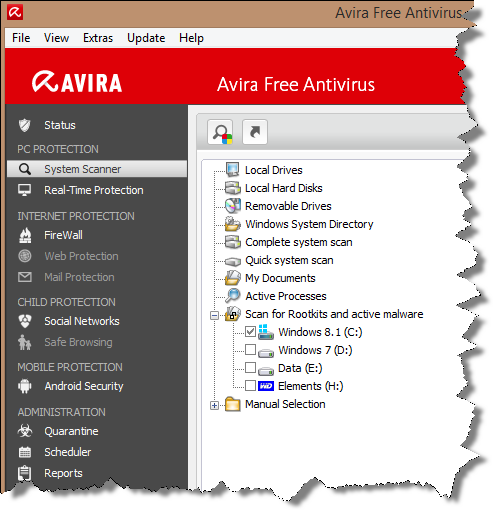 A “Quick Scan” is scheduled to run once a week by default but the built-in scheduler can be utilized to easily configure regular user-defined scans.

The “Reports” section displays a list of events relating to updates and scans in chronological order: 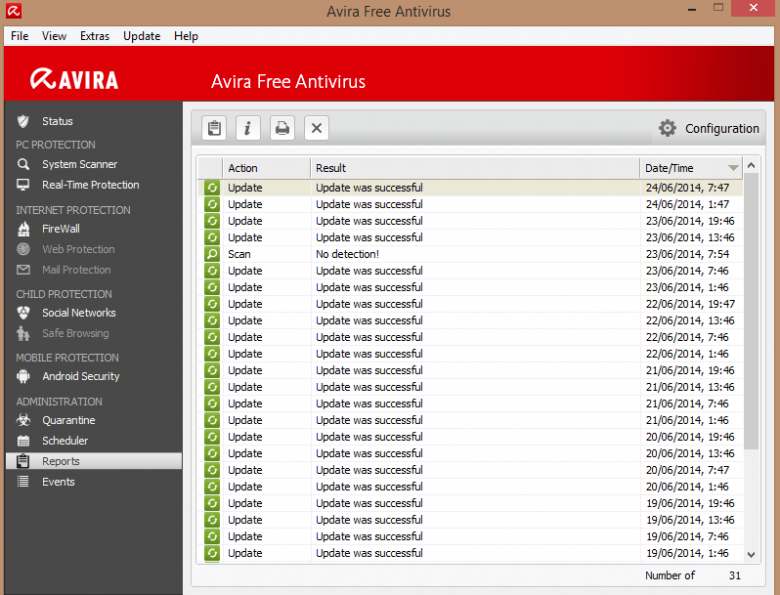 As you can see from the above screenshot, automatic definition updates are occurring at an average 4 times per day. Reports older than 30 days are set to be deleted by default, but even these parameters can easily be adjusted by the user.

The “Events’ section displays a list of … well… events (for want of a better word): 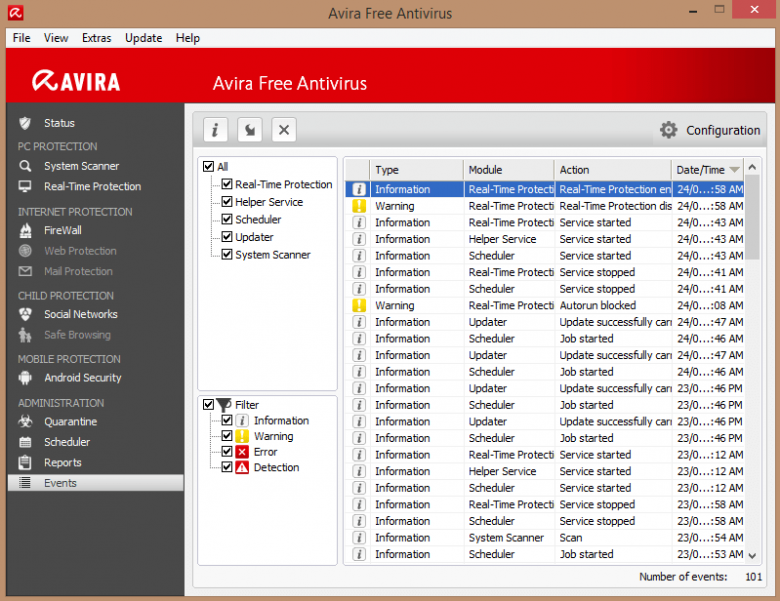 The yellow exclamation marks denote warnings. One is related to Avira blocking Windows auto-run feature when I plugged in my external drive. It doesn’t interfere with the normal operation of the connected device and is merely a security precaution against auto-run malware. The other is because I turned off Avira’s real time protection just to create an entry for you to see how it works.

If you prefer an antivirus solution which is quiet in the extreme and does not gobble up system resources, then Avira Free is probably for you. In the four months since I’ve been using Avira I have not received one popup suggesting an upgrade, in fact, no advertizing at all. Everything Avira does is behind the scenes and it is without doubt the quietest antivirus I’ve ever used.

And it’s light on resources too, in the following screenshot you’ll see 3 processes related to Avira totaling a measly 65MB. 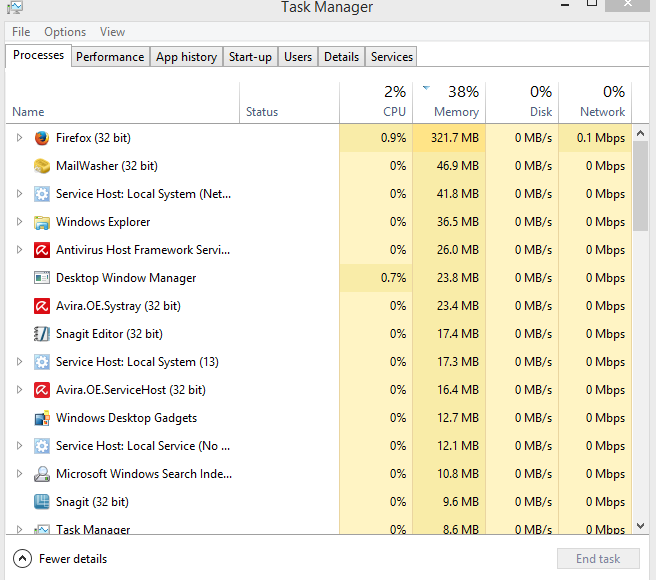 Compare that with Firefox’s whopping 320+MB.

Panda Cloud Antivirus Free has been making quite a splash in the detection rates department. In the latest test results from AV-Test, Panda Cloud Antivirus was the only free product tested which achieved 100% protection against both prevalent and zero-day malware, right up there with leading premium solutions.

What let’s Panda down slightly is its apparent negative impact on system resources. According to AV-Test, the industry standard is a 3 second impact, Panda’s is 7 seconds, both AVG free and Avast free are 2 seconds. Avira free was not included in the testing but the Premium edition, Avira Internet Security was and rated a 1 second impact, even with all the additional baggage.

Still, on newer machines with high-end specs, that shouldn’t be so much of an issue and, on detection rates alone, Panda Cloud Antivirus Free appears to be a worthy contender.