MalwareBytes Anti-Malware (MBAM) is one of my favorite go-to programs for finding the bad guys on my computer. They have a great reputation for being able to not only find, but ultimately remove, malware. Finding it is one thing; being able to remove it is quite another, and they seem to excel in that area.

Apparently, AdwCleaner is now a part of MBAM. Given my good feelings and trust regarding MBAM, and how they’ve embraced AdwCleaner, I can only expect the best from this utility.

AdwCleaner is a free, portable utility that removes Possibly Unwanted Programs (PUPS) from your computer. It goes further in that it scans the Windows Registry and internet browser entries on your computer. Paranoia sets in and before running this little puppy, a System Restore Image was created. You know, just in case things go awry.

Here are the results of the initial scan: 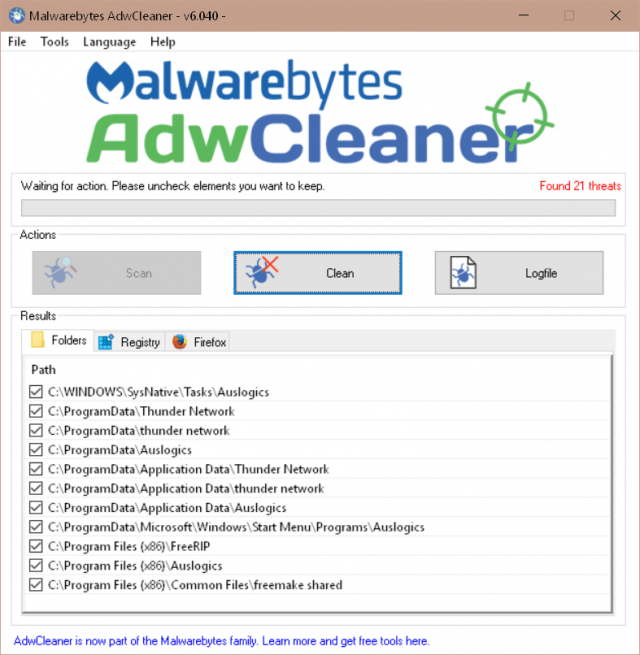 Incidentally, I found out that on successive runs, if it doesn’t find something in a particular category, those tabs are no longer shown. You’ll see an example of that a bit later in this post.

Anyway, Adwcleaner found 21 “bad” things on my system. That includes Registry entries, Folders, and Firefox. I found out later the Firefox problem involved an Add-on that I particularly like. Unfortunately, AdwCleaner does not tell me why it’s bad, just that it is, somehow.

At this point, I have the option of clicking the Clean button. I don’t really know what that means at this point, but I’m about to find out and it’s not all good.

You’ll notice in the above image that Auslogics is mentioned several times. So is Thunder Network. I have an Auslogics defrag program installed on the system. I don’t really need it anymore because, with one exception, my drives are all Solid State. The Thunder Network is an ominous-sounding thing and a complete mystery, and I don’t know how it got on my computer nor what it is. (I’ll have to check into that little nightmare later.)

Take note of the FreeRIP and FreeMake entries. I’ll talk about those in a minute. (I always thought they were suspect anyways, so no big deal if I lose them. They are useful, nevertheless, and I’d re-install them if ever needed again. I’m brave that way– it has to do with backups and such, and that whimsical, youthful sense of invincibility which I’ve never quite lost. And backups.)

OK, I got brave and hit the Clean button. AdwCleaner took a little time doing its thing, then I got a results window:

I’ll play along. I restarted my computer by clicking the overpowering, irresistible OK button.

Upon my return to the Windows environment, an on-screen report ended up being a text file showing me what it had done. You don’t really need to see that because I’m going to tell you using three short bullets:

Honestly, shouldn’t a quality utility warn me before it deletes programs/utilities I happen to use? I don’t want to hear about a removal process after the fact. I want to know what and why! And I most certainly want to know about it before it happens! And have the option to change my mind! C’mon, MBAM– you’re better than this!

There was one little thing left that bothered me and I still don’t know if it’s a good thing or a bad thing. Imagus. Imagus is a Firefox Add-on that AdwCleaner didn’t like for some reason. It never told me why, though. 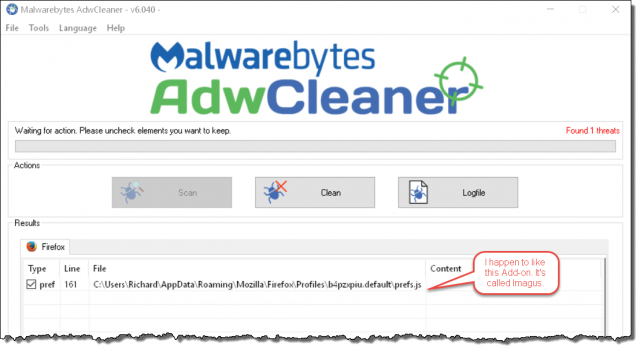 That is the problem– I don’t know why AdwCleaner doesn’t like this Add-on. Sorry, but I’m going to keep it. Incidentally, this entry was in the first run of the utility and wasn’t removed– even after a re-boot. Now, why is that? Perhaps it doesn’t have the sophistication to edit the Firefox preferences file? Maybe it is written to have the common sense not to do so? I don’t know, but I’m happy it didn’t tamper with it. I really like Imagus.

For those of you who may be interested, Imagus enlarges images by simply hovering over them with the mouse.  Since I use images a lot, it saves me a bunch of mouse-clicks. A simple thing really, but anything that saves me an additional click makes me happy. Look at it this way– if you save yourself 10,000 clicks over a period of 10 years, you will have that much more time for beer and/or women and the other wonderful things in life. It’s worth it… really! At my age, every click counts!

AdwCleaner seems like it means well but hasn’t matured yet. If you are going to delete programs on my computer, I want to know all the “whys” and “what-fors”. And I want to know before I click the damn “Clean” button, for sure!

I still have to look into that mysterious Thunder Network thing, though. Hmmm… it’s probably not something I would have known about had it not been for AdwCleaner, so there are positive sides to this. I didn’t have to hit the Clean button to find this out since it was in the original list of “bad things”.

Thank heaven for System Restore and backups. The strong suggestion here is that you use and abuse them,

23 thoughts on “AdwCleaner – The Good, The Not So Good”