I’m mad! You should be too.

You see, computer people have their favorite tools. Tools they’ve found through trial and error, tools they’ve come to trust, tools they’ve used for years, and tools they’ll recommended to others. Ask a computer “guy” how to do something and he will more than likely suggest you use a tool he knows and trusts will do the job. DCT is no different. If we believe in a product or service we recommend it to our readers and list it in the DCT Recommended area to the right of this article. It provides a service and, in a way, helps those who may have chosen a different product which might not have functioned as well. Ask a question on the forum and whoever responds will likely suggest the tools they have used and trust. If you ask a carpenter what air nailer he uses and he’ll likely tell you. He’ll also tell you why he uses that tool.

Bleepingcomputer.com is a well respected website whose purpose, just like ours at Daves Computer Tips, is to help people with computers and technology. No one could argue that this isn’t a noble cause. Well, almost no one.

In late 2014 a user stopped over at Bleeping Computer to ask a question. He was running three different security products and his computer was running slow. He was looking for help and the community stepped in to help this user by offering their advice. Advice gleaned from years of experience.

One of the products the user was running, SpyHunter, is also one of those programs with a less than stellar reputation within the community. One member, who also happens to be a Microsoft MVP, explained this to the user and provided evidence (with references I might add!) of deceitful billing, deceptive advertising, and user complaints about the software company, Enigma Software which owns SpyHunter, as well as instructions detailing how to remove it – the software makes some pretty drastic changes to a computer. All of this is exactly what one would expect and what would have happened at any other site offering the user assistance.

The best part of this whole story is that the user followed the forum member’s advice and was quite happy with the results!

And everything goes downhill… Fast

In most cases like this a company that cares about their product, the users, and the community would simply post on the forum and offer support to the customer. It shows goodwill and earns the company huge brownie points with the consumer and community alike.

This is NOT how Enigma Software handled the situation or you wouldn’t be reading this article!

Enigma Software contacted Bleeping Computer directly and asked that they delete the post, thereby removing all evidence of this grave misdeed from the internet. Of course, their request was dismissed by Bleeping Computer. This was a forum post by a highly regarded forum member. A member who spends considerable time helping users remove spyware from their computers. And what would a highly regarded forum member with lots of experience suggest using? Well, as you would expect he would suggest software that he knows and trusts from experience. He would also tell you about anything that could potentially be bad from his experience. This is exactly the type of response you would expect from a knowledgeable person honestly trying to help someone. Bleeping Computer didn’t delete the post – and I wouldn’t either. Personally I think he deserves a pat on the back and a hearty handshake!

So, your company may have a dubious reputation and you’ve missed a valuable opportunity to show goodwill toward a user and the community. It’s probably best to leave well enough alone and just walk away, right? Not Enigma Software.

Enigma filed a SLAPP lawsuit against Bleeping Computer. For those who’ve never heard the term, and I’m sure there are many, A SLAPP lawsuit is an acronym for Strategic lawsuit against public participation. In short it is a lawsuit usually brought by a larger plaintiff meant to bully a smaller defendant with the threat of large expenses for a legal defense. Lawyers aren’t cheap.

A strategic lawsuit against public participation (SLAPP) is a lawsuit that is intended to censor, intimidate, and silence critics by burdening them with the cost of a legal defense until they abandon their criticism or opposition.

New York Supreme Court Judge J. Nicholas Colabella had this to say about SLAPPs in 1992:

Short of a gun to the head, a greater threat to First Amendment expression can scarcely be imagined.

Not cool, Enigma. Not cool! 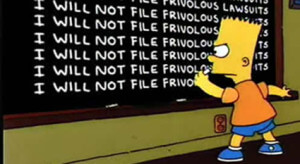 Unfortunately this is a thing and it needs to stop, now! Frivolous lawsuits like this cost taxpayers money, burden the courts, unduly hardship the defendants, and could literally change the internet we know and love. Bleepingcomputer.com’s legal team estimates it will take $100,000 to defend. Unfortunately most small sites, including DCT, don’t have a $10 legal budget let alone $100,000.

A lawsuit like this could easily shutter small websites across the internet, including DCT.

Take a few moments and read the following:

I’m putting my money were my mouth is and donating on behalf of DCT to Bleeping Computer’s defense fund as a show of solidarity with a fellow tech site and as a sign of support for free speech across the internet. I kindly ask that you show your support for bleepingcomputer.com by donating any amount you feel comfortable with and publicize the issue by sharing this post!

Click here to donate to the Bleepingcomputer.com legal defense fund!