Here are a couple quick fixes for Windows that you may run into sometime.

I originally wrote this back in 2009. I had Windows XP at the time and I did fix a Vista laptop with the same issue, so just in case.

I had a problem with my CD burner in my old Compaq computer. I thought the drive was damaged so I replaced it with another, but Windows kept displaying the same error–

Windows successfully loaded the device driver for this hardware but cannot find the hardware device. (Code 41)

I replaced the adapter cables but no dice. I had both on separate adapters so I tried putting them on the same adapter thinking the secondary adapter was shot– still no change. I put the drives in another old computer I have and they work perfectly, so online I went.

Click on Start, then Run, and type in regedit, and press Enter. This opens the Registry Editor. Be careful what you do here! You really should make a backup of the Registry before you change things.

You’ll see what looks like folders. In this case they are called Keys. Look for the one labeled HKEY_LOCAL_MACHINE.

Click on the little Plus Sign on the left hand side of it to open up the Sub-Keys (Sub-Folders). Do the same for each of the following:
SYSTEM
CurrentControlSet
Control
Class
until you get to this key {4D36E965-E325-11CE-BFC1-08002BE10318}. Just click on this to highlight it, then look in the right panel for a Key labeled UpperFilters and one called LowerFilters. Right click on each one and in the menu that pops up click on Delete, then OK.

After that I closed the Registry Editor and went to the Control Panel.

In the Control Panel window, open System, then click on the Hardware Tab, then Device Manager, then Right-Click on the name of the CD drive, then Uninstall. Restart your computer. Windows should detect the CD drive and re-install it. No problem. Everything should work perfectly now.

My nephew is into gaming but not much into fixing computer problems. He has a new gaming computer and he wanted to watch a movie he had on his TV.

He had already connected the computer to the TV with an HDMI cable but there was no sound on the TV. He told me it worked before on his old computer and he also said this cable was damaged and, at first, I assumed that might be the issue, so I gave him a spare one I had laying around.

It didn’t work, so I Right-Clicked on the Speaker Icon down by the system clock and clicked on Playback devices and made sure the HDMI device was selected as the Default Playback Device. It was. 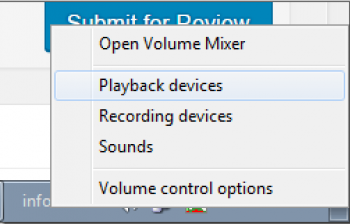 A brief check online and it was suggested to restart the computer after plugging in the cable. Sure enough, a restart did the job. I think that a restart without the cable would still have solved the problem.

Note: He has Windows 10 on his desktop.