Well, you guys and gals certainly did not take long to vocalize where 1803 was concerned. In fact, the results were resounding! Well met.

Due to the wonderful response we received for last week’s 1803 post, in this Quick Tips article I will be showing you how to defer the very thing that seems to burn in the hearts of many.

Note: The following steps will not work in the Windows 10 Home edition.

How To Defer Windows 10 Updates

Every month the vernacular changes. There was a time when it was called the <something> update. Now, it’s called the “help with your update” update. If you go to the Settings App, you can choose from different types of updates. Isn’t this fun? I don’t love updates.

I used to. There was a time when I looked forward to Windows updates. Really! That was back when things were similar to what might be called stable. Now days, Windows is far from stable. It is a gamble every time you download an update. It may, or may not, work. Unless you absolutely, positively can’t live without a new “feature”, my recommendation is to hold off until it appears that most of the bugs have been exterminated.

If you are one of the wise ones who would rather be safer than be on the bleeding edge (just because), then read on…

How To Defer Updates

That should bring you to a screen that looks like this: 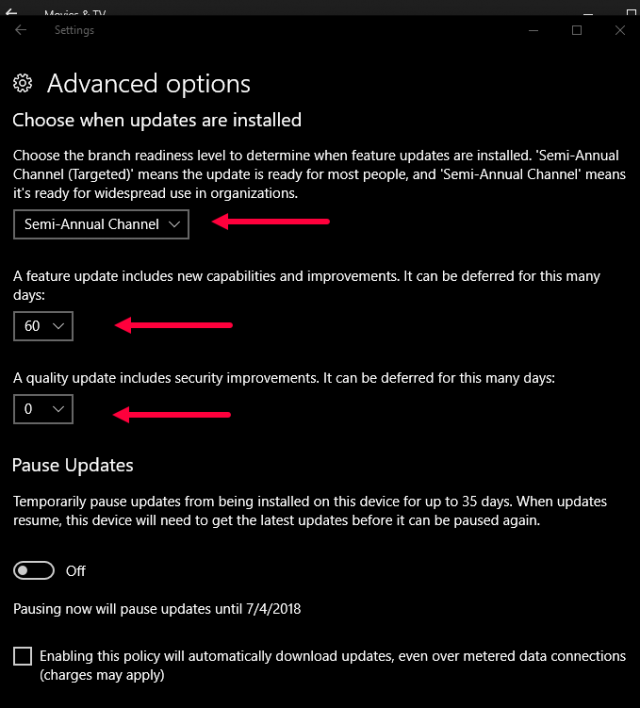 In the first drop-down menu there are two choices:

The next drop-down menu lets you control what Microsoft calls Feature Updates. This includes major feature changes and additions such as those found in the infamous 1803 patch. You can set this anywhere from zero days to 365 days. As you can see, mine is set to 60 days. I’ll keep jigging this number upwards until I am satisfied that Microsoft has fixed the update, or at the very least, has brought it to a reasonably stable condition (i.e., where fewer people are complaining about it).

Quality Updates include security patches such as Windows Defender virus definitions. These are important to stay abreast of, so I don’t recommend delaying this. You can, however, set this delay for up to 30 days.

In the past, notably in Windows 7, Microsoft has not recognized these settings and has updated systems even though these delays were in place. I have not had this happen to me, but you need to be aware of it, just in case.

The same goes for Windows Home users. Normally, telling Windows Home that you are on a metered connection is enough to stop the unwanted updates, but again, this does not always work.

Why Microsoft would put in place these user controls and then sometimes ignore them is beyond me. Honestly, it only serves to lull their customers into feeling a sense of control which may not necessarily exist. The only true way to guarantee that you won’t receive these unwanted updates is to pull the plug. You’re right– I don’t like that option, either.

As always, if you have any helpful suggestions, comments or questions, please share them with us,