Yeah, that’s the news floating around town. Time Warner Cable (TWC) may buy a 25% stake in Hulu. Before I rant on that, here’s my back story:

I’ve had TWC for almost twenty years now. They are pretty much the only game in town where I live unless you want to go satellite OR pull the plug on your cable service. They have raised their prices dramatically over time, (almost every year) to the point where I now pay $108 for what they call “extended cable” (which is really a few prime channels, too many sports channels, and a bunch of junk channels) and what I call “so-so” internet. This price is in their Triple Play package, a short term deal to suck you in, which expires after a certain time period at which point your monthly price then SKYROCKETS. Please note their current commercials displaying improved customer service and how they’re trying to up their game there.

Also, I recently subscribed to Hulu for about $12/month just to binge watch the series Fargo on a 30-day trial and now I’m waiting to see how long the service will keep me interested.

Anyway… they (TWC) are the only game in my town and most people here in upstate New York loathe them.

So now TWC is looking to take a bite out of Hulu and possibly cut one of the features that makes Hulu cool – showing episodes of current TV a day or two after they air:

“Time Warner believes that the presence of full, current seasons on Hulu—or anywhere else outside the bounds of pay-TV—is harmful to its owners because it contributes to people dropping their pay-TV subscriptions, or ‘cutting the cord,” the publication writes.” – Geoff Herbert/syracuse.com

Let me grab my violin. 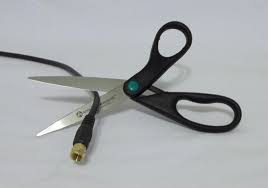 Time Warner wants to upset a service, like Hulu, that offers a commercial-free option, a backlog of TV series’ episodes, and current TV episodes shown shortly after they air because they are afraid of people cutting the cord? DUH. The only reason I haven’t done it yet is because I only got into cable boxes and digital TV recently and I didn’t want to make the wrong decision. Now, however, with even HBO entering the a-la-carte field, it will be a no-brainer to ditch cable services like TWC that charge way too much for way too little in return. I already know so many people who are internet-only at this point.

What TWC should do is lower their prices and open up their channel options. But, Hell would have to freeze over for that to happen and even with the current state of climate change in the world today, I don’t see it happening. Yet another example of companies reacting to their problems instead of responding to their customers.