It’s a question I’ve often pondered myself, and while I have no illusions over the almost impossible nature of ascertaining entirely definitive conclusions, a market share analysis report from OPSWAT has at least shed some light on the subject:

“This report shows usage data for security applications on Windows systems. The data was collected using OPSWAT’s AppRemover tool, which utilizes the detection capabilities of the OESIS Framework to collect information regarding the applications installed on endpoint computers. This tool is used around the world by home and business users, both expert and inexperienced in security software. The sample is assumed to be representative of the market for this report, based on the wide accessibility of the tool to a large range of users.

Reports of applications installed on host computers are created. These reports are then compiled to generate the market share calculations. More than 120,000 data points were compiled for this report. Please note that OPSWAT is not a research institution; this report aims to distribute the unique data collected to inspire public discussion, not to make any claims as to why changes have occurred.”

As I said, not conclusive by any means, and even OPSWAT includes a statement to that effect. But a guideline nonetheless and, in my opinion, a pretty accurate one at that. Here are the worldwide market share figures extracted and compiled by OPSWAT: 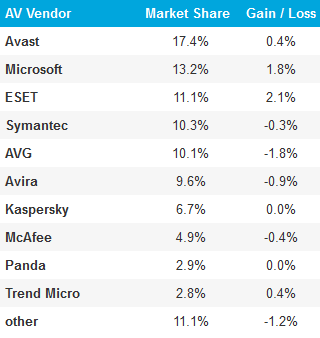 With this accompanying report:

Avast continues to dominate the worldwide antivirus market, as it has for the last few years. Now at 17.4%, the vendor has slightly increased its share compared to the previous 6-month period. However, its top two competitors, Microsoft and ESET, increased their shares at faster paces of 1.8% and 2.0%, respectively. Over this period, Microsoft climbed from 3rd to 2nd on the list, and ESET from 6th to 3rd. These top three companies’ increase in market share led to a general decline in share for the challengers. The biggest loss came from AVG, who fell from 2nd to 5th place. Overall, the top ten vendors included in this report are increasing their hold on the market, with a 1.2% gain for a total market share of about 89%

The results shown by OPSWAT are fairly predictable really, at least they fit well into my expectations: Considering Avast is the leader in innovation and new features, especially among freeware, it’s no great shock to see it setting the pace. MSE has enjoyed favorable editorial and user reviews ever since its initial release, its reputation for simplicity and being light on resources has endeared it to many, and later versions have seen vastly improved detection rates – so, certainly no huge surprise to see MSE placing second. Similarly, ESET’s lightness on resources and uncomplicated design have been widely acknowledged among the shareware offerings.

No great surprise either to see some of the expensive shareware appearing down the list, and AVG’s fall from favor has been well documented. All in all, pretty much what one would anticipate.

13 thoughts on “Which Anti-Virus software is most popular?”