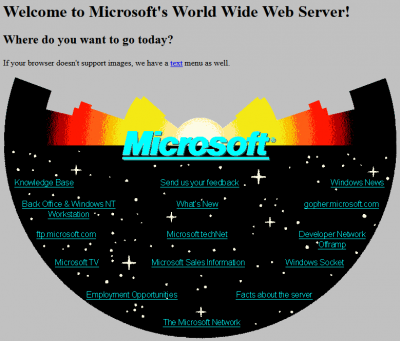 Who remembers when Fred and Barney were brought to life on the big screen, and Forrest Gump first uttered the now immortal words “Mama always said life was like a box of chocolates“? When Lisa Marie Presley married Michael Jackson, and video of OJ Simpson fleeing police in his white Ford Bronco was all over the news?

The year was 1994, and if you can remember back that far, you might also recall visiting the newly launched Microsoft.com. Mark Ingalls, the first administrator of Microsoft.com, says at that time, when slow dial-up connections were the norm, the page would have taken a while to load. “For most folks at home in that day and age, you would have been able to count to three or five before that picture showed up on your screen,” he says.

Among the reasons Microsoft started a website was to put its growing Knowledge Base online. At the time, the company managed support forums for customers on CompuServe, one of the earliest major Internet dial-up service providers. In those days there were only a few thousand websites compared to today’s almost 1 billion. There was no Facebook of course, no eBay, no Amazon, no Wikipedia. Remarkably, in the 20 years since it has been on the Web, Microsoft.com has remained in the top 10 most-visited websites worldwide.

In terms of Web design, the notion, much less the phrase, didn’t really exist. “There wasn’t much for authoring tools,” Ingalls says. “There was this thing called HTML that almost nobody knew“. Information submitted for the new Microsoft.com website often came to Ingalls via 3-1/2-inch floppy disks.

Oh my, how things have changed!

Trent Walton, Dave Rupert and Reagan Ray of Paravel Inc., in Austin, Texas are responsible for the most recent redesign of Microsoft’s home page,  and to help celebrate the 20th anniversary, Mr. Walton and Mr. Rupert recreated the 1994 page from scratch, describing it as “sort of like an archaeological dig, digging through dinosaur bones, to find out how they did this then.”

The 1994 home page looks somewhat odd and archaic by today’s standards, you can take a trip back in time by clicking this link: http://www.microsoft.com/en-us/discover/1994/

(*Note the helpful hint from those days – “If your browser doesn’t support images, we have a text menu as well“)