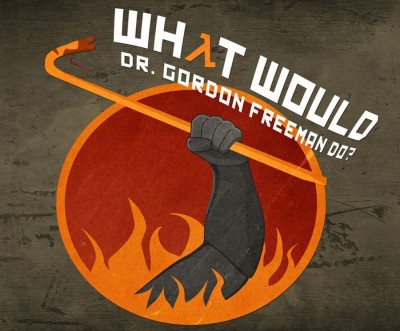 Jesus Christ, Che Guevara, Winston Smith and Gordon Freeman have all been described in similar variations on this theme and let’s face it, the right man in the wrong place can make all the difference in the world.

Individually of course, they each had their own set of rules and core beliefs; but as protagonists in their own time, each can be said to be integral to a much bigger struggle; one which so many of us are able to relate to in modern popular culture.

To many, Jesus was a revolutionary, and Che the modern day epitome of that genre, appealing to some very basic core instincts in so many of us.

When George Orwell finally finished the manuscript to Nineteen Eighty-Four in 1948, he may not have foreseen the influence it would have in so many facets of life in the modern age. Winston Smith, whilst not quite a household name, can be held up as the anti-hero we all admire and aspire to; we feel we know him when we are faced down by the unforgiving might of the leviathan state machine.

Dr Gordon Freeman, on the other hand, portrays heroic qualities of a different nature as he battles his way through hordes of creatures from another dimension whilst being pursued by the same military forces that once protected him, but now hell bent on oppressing the truth.

So, popular culture touches us all in all it’s many forms, from the banal antics of a drama queen to the heroic deeds of an anti-hero, real or fictitious.

Mention V for Vendetta in a loud voice at the bar and you can be sure that most of your friends will relate immediately and some may even whisper that they too have one of those masks, lurking in the drawer waiting for that special moment when the people rise up. After your fourth Scotch, you may also be starting on ‘Open the pod bay doors Hal.’ and ‘I’m sorry Dave. I’m afraid I can’t do that‘, by which time a small crowd has gathered around you and yes, they tell you that HAL was in fact the anti-hero and not Dr David Bowman.

Well, Jesus did change the world; El Che also, in his way and whilst Winston lives on in our minds as the anti-hero who tried to change the system, Dr Freeman and his ilk can be resurrected at will to fight oppression, the forces of darkness and all manner of bullying repression.

One of the most popular themes in gaming over the years has revolved around the struggle to survive against the odds, usually some very unlikely odds at that. It’s a wonderful escape from the 9 to 5 existence and unless you’ve enrolled in Special Forces, it’s about as real as it gets, in a virtual world anyway.

Some video game plots involve being transported to an alien planet as a US marine to prevent an invasion of Earth, such as Quake; or as in Doom 3, a scientific facility on Mars in the year 2145, where teleportation research all goes horribly wrong and you, as one of a handful of marines, need to fight your way through evil incarnate. In both instances, fighting against the odds would be a major understatement.

On the other hand, in recent incarnations of Tom Raider and Far Cry, we see our protagonists marooned on idyllic islands somewhere in the Pacific, only to discover that all is not the paradise their holiday brochure had envisioned. Naturally enough, both Jason and Lara will single-handedly need to do battle with hordes of blood thirsty mercenaries, psychotic cult leaders and rampaging carnivorous man eating beasts.

The central theme of fighting against forces of repression and evil is quite a hook, not only in video games, but also in film. But in games, this theme is able to pull you in interactively in a manner that film or literature can’t quite achieve.

Some tough moral choices are presented to the player in certain first person shooter (FPS) role playing (RPG) games, which may or may not affect the outcome of the story, with much of that hinging on how early in the storyline the player chooses his moral path.

Deus Ex, Bioshock and Mass Effect are examples of this genre and when presented with the choice of whether to betray one’s own brother ‘for the greater good’ in Deus Ex, it can make for a sticky dilemma. By contrast, rigidly linear storylines such as Half Life, Max Payne, Far Cry and numerous others, offer the player no such game changing choices, but neither do they detract from the enjoyment in the dangerous path to the climax.

The original Half Life was launched a little over fifteen years ago, when 3dfx was king, the Voodoo 2 3d accelerator card de riguer and a milestone in video games had been reached.

Our protagonist, Dr Gordon Freeman, is a young MIT graduate in theoretical physics who finds himself at the centre of an experiment gone wrong at the Black Mesa Research Facility in New Mexico. The resulting resonance cascade triggers a space time continuum rupture which allows an alien invasion from another dimension. The creatures begin to destroy all the humans and Dr Freeman is left at the facility with no more than a crowbar to defend himself against both the aliens and a military clean up team sent in to eliminate all evidence of the event.

Some years later, Dr Freeman can be seen entering City 17, a dystopian, broken down and war ravaged city, not dissimilar to Airstrip One of Orwellian distinction. He soon gets marked down as Anticitizen One by the all seeing eyes of The Administrator and so begins his odyssey to restore equilibrium and freedom to the citizens that remain.

One could also draw conclusions from world events over the last several years; dictators overthrown, whole nations rising up against oppression and security agencies exposed as the spying, dastardly traitors that they really are to you and me. What many of us see in City 17 and Airstrip One is just a glimpse of what might be and what has been; but you can be sure that Winston Smith and Gordon Freeman see it for what it is.