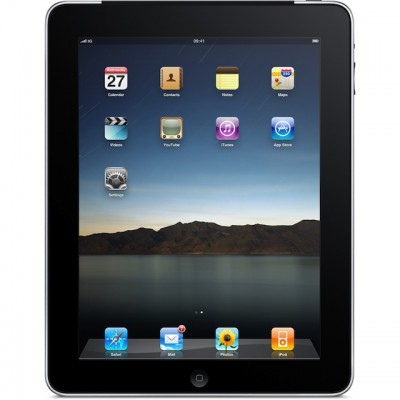 The iPad turned three years old on April 3rd. More than 300,000 Wi-Fi only iPads sold on its first day.

On the same day that the 3G-enabled iPad went on sale (April 30th), Apple sold its millionth iPad  after only 28 days on the market. The original iPhone had taken 73 days to hit that same mark.  The iPad was selling at a pace 2-1/2 times the original iPhone. This is for US-sales only. International sales began in May, 2010 and were delayed due to the overwhelming response to the US launch of the iPad.

While there were tablets that came before it, including Apple’s own Newton, Apple single-handedly redefined and revitalized the near non-existent tablet market. Still the predominant player in the tablet market, Apple now faces some stiff competition from the lower-priced Samsung and Amazon tablets.

Getting back to the initial launch, I can still remember the jokes about the name, ‘iPad’. How could Apple use that name? Couldn’t they come up with a better name than that? These were some of the questions being asked at the time. Now, the term, iPad, is commonly used with no snickering and has almost become to tablets what Kleenex has become to facial tissue. People will say to me, ‘I want an iPad but not necessarily one made by Apple.’ I explain to them that ‘iPad’ and ‘Apple’ are not mutually exclusive. Some get it. Others don’t.

A testament to how commonplace tablets, in general, and the iPad, in particular, have become are people’s reactions to it.  Early on, I would be asked many questions and people would want to see it.  Now, 121 million iPads later, it’s not such a big deal.

Newspapers – I abandoned print newspapers about two years ago. I absolutely love the Wall Street Journal iPad app. I am also a fan of CNN’s app. I use several local news apps as well. They are sufficient for the news that I am interested in but I do wish that they would refresh their content more frequently.

Magazines – The strange thing about magazines is that if you subscribe to the print version, the online version is typically free. So I still subscribe to several print magazines in order to get the online version – Fortune, Wired, Time and Consumer Reports to name a few. Newsweek has gone all digital as of the first of this year. I suspect more magazines to do the same. The ultimate media app is Flipboard. It allows you to aggregate magazines, social networks and online media into one, fine-looking online magazine.

Books – I haven’t bought a physical book since the first Kindle came out in November of 2007. I can’t give the iPad all of the ‘credit’ for my lack of book buying. But I will say that the iBooks app is great and the iPad Kindle app is just as good of a reading experience as the Kindle itself (at least for the 1st-generation Kindle).

Television – I still watch television on an honest-to-God real TV. But I also watch shows on my iPad. ABC, in particular, has a great iPad app. I also recently watched some of March Madness via the NCAA March Madness Live app. Then there’s Netflix. I watch a lot of old television shows using the Netflix app. Although, I’ll typically do that on my TV using Apple TV than my iPad if I am home. iTunes has a multitude of TV shows and movies in its arsenal but I’m not a frequent user of them.

Work – I routinely, though not exclusively, use my iPad at work. My favorite work-related app is Evernote. With its multiple notebooks and ability to sync across devices, I find that it meets my needs quite well and I find that I am more organized when I use it.

Social networks – I am, by no means, a big social network users.  But I love HUDLD for looking across different social media venues (Facebook, Twitter, LinkedIn, FourSquare) simultaneously. I also am a big fan of Tweetbot because I have two Twitter accounts (@techmom92 and @junovotech). Tweetbot allows me to seamlessly move between the accounts and provides notifications of mentions and retweets.

Cooking – Yes, the iPad has even changed how I cook (or at least how I store recipes). I have entered all of my recipes into RecipePad. For my mom’s old recipes, I took a picture of each recipe card with my iPad and imported it into RecipePad. No need to retype everything and the picture of the recipe card kind of gives it an ‘old school’ feel.

Hobbyist – One of my hobbies is mobile app development. This is one of the most significant ways in which the iPad has changed what I do as opposed to how I do something. Without it, I don’t see myself doing mobile app development. Using RunRev’s LiveCode, I was able to have fun learning something new. While no ‘Angry Birds’ in terms of sales, my app, Number Wizard, has experienced modest success in the App Store.