“I’ve always maintained, and still do, that no matter what the advertisements tell you, your file transfer speeds are limited by your hardware. No software solution, no matter how sophisticated it may be, will increase those speeds. Granted, with some slick caching tricks, it may appear to be faster, but it is ultimately an illusion.”

The above is a quote from an article I wrote a year ago about TeraCopy and I will not back-pedal. I still believe it to be a true statement. However, due to a number of requests, I will once again return to this topic. There has been a new release of TeraCopy in the interim and I have been told multiple times by commenters on that post that it is better and that another look is warranted. So, here I go again, delving into the myth of speedier file transfers. You may detect a note of skepticism from the onset, but I will try to be impartial, nevertheless.

Before we begin, I should make a point of telling you that there are definite advantages to using a third-party file copier/mover such as TeraCopy over the default Windows mechanisms. I will mention those a bit later, but for now, let’s simply talk speed.

I will try to duplicate my previous speed comparisons by first copying several thousand files, then copy a single large file. The comparison will be a match between the standard Windows file copy and TeraCopy. The copies will be made from one partition on the same hard drive to another in all cases. Over the past year, things have changed drastically, so the sizes of the files may have changed.

Last time I did this,  Windows was a clear winner from strictly a speed standpoint. Let’s see what happens this time ’round… off to the races!

Windows did a half-decent job of copying the 1131 files (6GB) in a reasonable amount of time at roughly 80 MB/s: 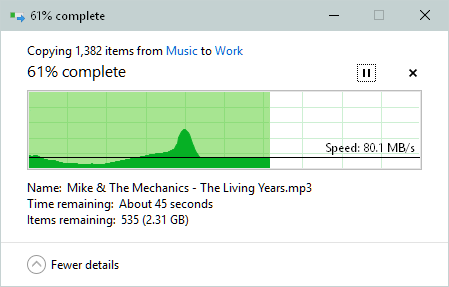 As you can see, the the speed varied wildly– same as before, but it was an acceptable result.

The same files copied with TeraCopy:

Although the speed is slower in the above example, it finished in acceptable time and seemed more stable throughout the process.

Let’s now compare a single huge file and see what happens. For the following examples I’ll be using a single 12GB backup image created by Acronis, my backup program of choice.

This single file took a couple of minutes and, as always seems to be the case, the transfer speeds fluctuated. They did eventually level out at around 50 MB/s, which isn’t particularly fast on a modern hard drive. 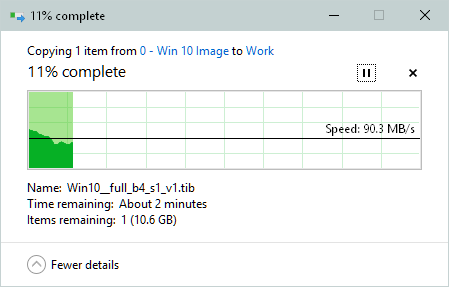 Surprisingly, this copy took an additional minute to complete. I never expected this. In TeraCopy’s favor, the transfer speeds were rock-solid throughout the process. (It most certainly was not faster.)

Before I continue, I will submit that the above “tests” are not of a scientific or well-founded nature. I have no stop watch at hand nor did I time things closely by any stretch of the imagination. Please, angry TeraCopy devotees, cut me some slack. 😉  Read a tad further to allow me some redemption.

Ultimately, the above results are quite meaningless with the one exception being that a third-party file transfer utility is not faster. (I think that was mentioned at the beginning of this post.)

The true measure of a file transfer utility is how well it overcomes corrupt files and, on top of that, allows you to continue the often lengthy process without losing all that time. If it means slower transfer times, but increased efficiency, then I am all for it. I certainly don’t want a single corrupt file to cause a 30,000 file transfer to choke, where I might have to start the whole process over again. Windows might do that to you; TeraCopy won’t be that evil.

If you are the type of person who moves a lot of files around, and perhaps in great numbers, then I can highly recommend a program such as TeraCopy. It is a top-notch piece of software well worth considering,

10 thoughts on “TeraCopy Revisited – Is It Really Faster?”