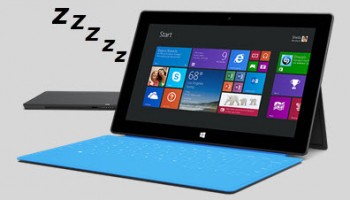 A couple days ago a guy bought me his Surface (RT) tablet running Windows 8. From the description of the issue as he explained it, the problem seems to be that it powers down fine when they are not using it but then won’t wake up. In theory, just clicking a button should spark it to life but he told me told it usually takes 2 days before anything will happen. Apparently, this is a fairly common Surface issue.

Since Windows XP, I’ve had problems with Windows going to sleep and occasionally freezing up in that state with the only way out via a reboot. I’ve also witnessed this issue on other people’s computers as well. Usually rebooting will clear this out (until it happens again). Which leads to the next issue, fast reboot. Most computers, including tablets are designed to startup quickly – as far as I’m concerned, a big mistake.

Since they are not shutting down completely, turning them on and off again doesn’t work as well as it used to. Pushing on the power button in this case only sends it into sleep mode, and if sleep mode is already frozen up…

To force a laptop to reboot completely you usually have to power it off by holding down the power button for 5 seconds. With these Surface tablets you have to hold the power button for 30 seconds. I might be wrong but I’m pretty much convinced that if they’d tried that they would not have to wait 2 days for it to clear out. My guess here is that it takes 2 days for the battery power to wear down and that then forces a complete reboot.

By the way, scans for malware came out clean. Hard drive and memory all check out as well. What’s your opinion?

Unable to find any obvious causes, I decided to disable the sleep options, by clicking on the battery icon then clicking on More power options > change plan settings > then the options for Put computer to sleep, I changed both to Never. Then clicked on Change advanced power settings and found the Power button and Lid section – clicked on the blue letters and changed them all from Sleep to Shut down. That way if it gets stuck again they might be able to clear it out by just shutting it down.

Not a perfect solution but a workaround which should at least get them out of trouble.