I wanted to give you guys an update on the wonderful looking desktops and laptops that Vizio announced at CES this year. I read today on Gizmodo that Vizio had confirmed a June launch for the vizio computers. The biggest vizio Laptop should be available this month at Walmart for about $900 while the 27-inch all-in-one will set you back $1100 from the big box store. When the editors at Gizmodo heard the launch rumors, they contacted Vizio directly. Here is Vizio’s response to Gizmodo:

We are excited about the official VIZIO PC launch this month. We will be withholding any comments regarding previously unannounced product specs and retail channels until our official launch. At that time, we will be announcing all of the exciting details around these highly anticipated PCs.

Basically you should be prepared for a press announcement from Vizio and Walmart in 3….2….1…. 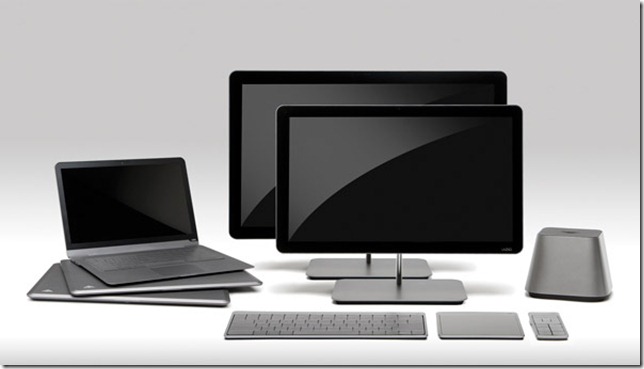 Everyone but the snootiest fanboys loves budget tech. Maybe “budget” isn’t the right word: it’s connotation brings to mind bulk cereal in a bag and big suits sitting in board rooms arguing about who to screw-over and which corners to cut. But it’s not always the case. I bought a pair of Insignia (BestBuy House brand) bookshelf speakers several years ago for $40 because I read on numerous AV and Hi-Fi forums that they rivaled $80-$120 polk, sony, and yamaha bookshelf speakers. They do. I own them still today. Consumer electronic company Vizio has been making great televisions, home audio, and other entertainment devices for the better part of the last decade, but they haven’t ventured into computers up to this point. The video and pictures below should be a good example of the favorite saying of lazy people: great things come to those who wait.

I’ve been looking everywhere for specs on any of these models and I can’t even find a goof completely unfounded rumor. The LA Times had an article on the new PCs stating that most of the ports and components in the All-in-one will be located in the base and feature USB 3.0 ports and two HDMI connections. Over at Engadget, they had this to say.

While not offering much more information than the earlier reports, we’re still anxiously awaiting specs and pricing but what we do know is that when the family arrives this spring, it will be sporting a “clean” system image optimized by Microsoft itself and ostensibly free of bloatware. Based on what we’d gathered already, we know that 24 and 27-inch all-in-one PCs will make their debut alongside 14 and 15.6-inch thin + light laptops in addition to a 15.6-inch regular ol’ laptop — all powered by Windows 7.

No word yet on price, performance, or availabilty date. You can go to the Vizio release page though and request to be notified when they drop/ I’m also including some of the pictures from that Engadget piece, because they really show how beautiful these computers are. They definitely give Apple a run for their money in the looks department.

5 thoughts on “Update: Super sleek and elegant PC’s and Laptops previewed at CES by… Vizio?!”