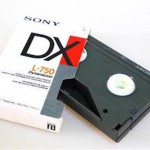 Forty years after their introduction, Sony has announced that it will no longer produce Betamax tapes after March 2016.   Currently, the tapes are only produced and sold in Japan.

Introduced in 1975, the Betamax format was on its way to becoming the industry standard until the appearance of JVC’s Video Home System (VHS) format a year later. VHS offered longer-playing ability, which made it possible to record an entire movie on one tape.  Betamax eventually lost the consumer battle to VHS but still maintained some level of popularity. Both formats were eventually supplanted by DVDs and Blue-Ray discs which, in turn, are less popular due to streaming.