Get out the balloons and cut the cake, it’s the mobile phone’s 40th birthday today!!

Startling though it may now seem, the very first call on a handheld mobile phone was made on 3rd April way back in 1973. Motorola Chief Researcher Martin Cooper was in downtown Manhattan when he placed the historic call from his DynaTAC prototype to an archrival at Bell Systems. The famous event lasted for around 20 minutes, until Mr. Cooper suffered a familiar problem – a drained battery!

Mr. Cooper recalls:  “The first cell phone model weighed over one kilo and you could only talk for 20 minutes before the battery ran out.  Which is just as well because you would not be able to hold it up for much longer.”

A decade later, Motorola went on to launch its first commercial handheld phone, the DynaTAC 8000X. It cost in the vicinity of $3900.00, had a talk time of just half an hour and took 10 hours to fully charge… my, how things have changed!

Despite the hefty price tag and apparent drawbacks, the newfangled device soon became a pop culture icon, embraced by trendsetters and the business elite. That pop culture appeal drove Motorola and its rivals to embark on an unremitting quest for miniaturization and innovation, a path which would eventually lead to a combination of the personal computer, digital camera, and cell phone into the single device we know today — the smartphone. 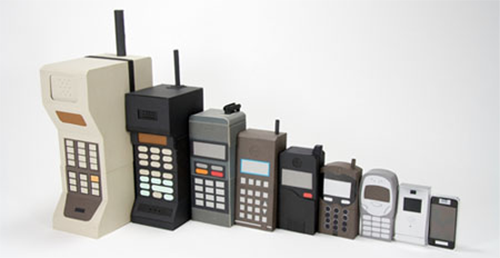 Back in those heady days, Mr. Cooper was reputed to have predicted during an interview with the BBC that some day we would have phones small enough to carry around discreetly and which would include a range of auxiliary attachments. Mr. Cooper, Sir… I doff my hat to you… now, what are this week’s lottery numbers?

I was involved in the motor vehicle industry when I got my first ever mobile phone, it was about the size and weight of a house brick… an admission, I guess, which really shows my age!

Do you remember your first ever mobile phone?