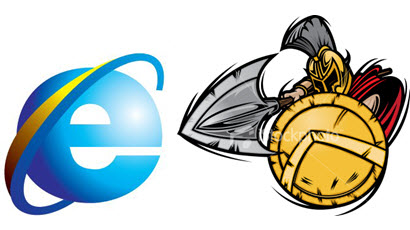 According to a several ‘reliable sources’, including Mary Jo Foley, Microsoft is working on a new web browser – codenamed Spartan – which is set to ship with Windows 10. Spartan will reportedly look like a mix of Firefox and Chrome, and, perhaps most critically, will apparently support proper browser extensions.

Of course it’s all conjecture at the moment, but, according to Mary Jo Foley, Windows 10 will ship with both Internet Explorer and the new lightweight ‘Spartan’ browser (which will be available for desktop and mobile platforms).

Is this the beginning of the end for Internet Explorer?

If the rumors prove to be true then one would have to say yes. The Internet Explorer name has struggled to regain credibility following the diabolical version 6 and a new browser with a new name would go a long way to helping resolve that issue.

I suspect Microsoft would plan on keeping Internet Explorer around for while though, mainly for backwards compatibility and to help die hard users through the transition period but, eventually, I can see the demise of the once ubiquitous browser on the horizon.

Spartan is reported to be using the same Trident rendering engine and Chakra JavaScript engine as Internet Explorer, rather than moving to the oft preferred WebKit rendering engine, which tends to shed an element of doubt as to whether it will merely be a rebranding – as in a hip new interface and name that puts some distance between it and the old Internet Explorer – or a truly new browser. I guess time will tell.

Regardless, the lack of extensions has always been a major drawback for Internet Explorer and the inclusion of support for these popular add-ons will help place the new browser on a more equal footing with its rivals, as well as providing more ammunition in the ongoing browser war.

Personally, I think it’s a pretty savvy move by Microsoft, and one which, if it does indeed come to fruition, will almost certainly see a heightening of Mozilla’s concerns over the declining popularity of its Firefox browser.

‘Spartan’ is merely a codename at this stage and what Microsoft’s final choice might be is anyone’s guess. Considering Microsoft’s history of choosing terrible names, I wouldn’t be surprised if it was something like “Simple Simon” or maybe “Zippity Doo Dah”.

What do you think Microsoft should call the new browser?