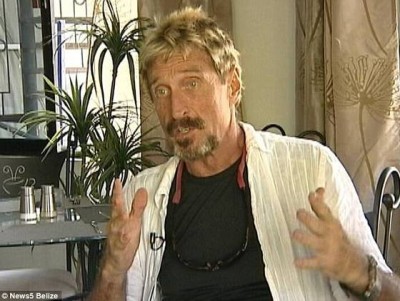 Yes, that’s right,  McAfee Anti-virus founder John McAfee is on the run from police in Belize.   The police want him for questioning in the murder of McAfee’s neighbor.   Wired Magazine contributing editor, Joshua Davis, was looking into ‘friction’ between McAfee and the Belize police over the past 6 months; has had phone conversations with McAfee since he disappeared Sunday morning.

The White Bronco of OJ Simpson became an icon of the 90s.   Well, today marks a new era in that our ‘White Bronco’ is actual Twitter account of Joshua Davis.

McAfee at 5am: "The police have set up roadblocks across the country to catch me. I slept last night on a mattress infested with lice."

Either way, McAfee says he has no intention of turning himself in for questioning as he believes he will not survive police custody.