A recent discussion on the DCT Forum reminded me of Malwarebytes’ new anti exploit software which, when I last looked into it, was still in Beta stage. Malwarebytes Anti Exploit is now out of Beta and available in the usual Free and Premium editions.

Malwarebytes released the new software following its acquisition of ZeroVulnerabilityLabs, including the latter’s anti exploit technology. For home users who may be seeking an extra layer of protection, Malwarebytes Anti Exploit Free would be a very good choice. The free edition is pretty basic but does cover the main area of concern for most home users…  browsers and browser add-ons. It also includes protection for the uber vulnerable Java.

To add to the appeal, Malwarebytes Anti Exploit Free does not require any configuration or consume very much at all in the way of additional resources … in other words, it’s simple and lightweight.

According to both independent and commissioned testing, Malwarebyres Anti Exploit is also highly effective, although as mentioned, the free edition’s protection is limited to Chrome, Firefox, Internet Explorer, and Opera, protecting both the browser and any add-ins, plus Java.

The following is a quote from security blogger Kafeine who was commissioned by Malwarebytes to test the software’s effectiveness:

Malwarebytes Anti-Exploit is working as expected against all widely used exploit kit. It works on Java exploit where Emet wouldn’t. This product sounds like a good additional layer against unpatched (“0day”) exploits.

This is probably going to be the shortest part of the entire article because… there really is very little involved. Download is a 2.5MB executable and, as one would expect, installation is straightforward and bundle free: 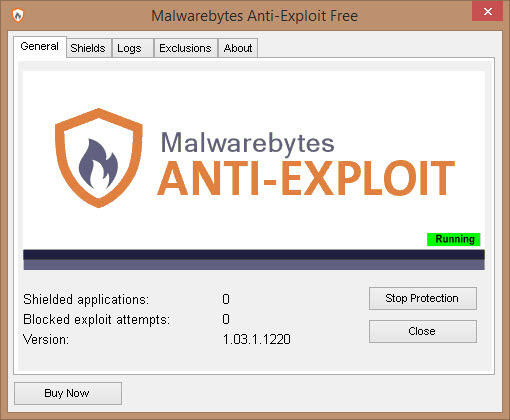 All supported applications are protected from the get go, no configuration or settings to worry about, just a button to switch protection Off or On. If you look under the “Logs” tab with a browser running, you’ll see a message that the browser is protected: 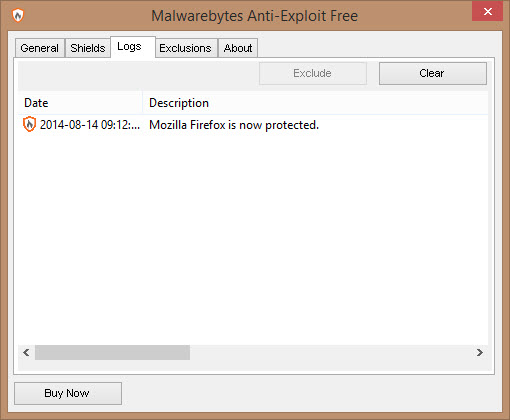 And that’s pretty much all there is to it.

I’m all for a layered security approach, particularly when a software adds something extra into the equation without unduly expanding on resource usage.  Anyone still persevering with XP should definitely install Malwarebytes Anti Exploit, and it would also be a great choice for many Windows 7/8 users to add an additional layer of protection into their system, especially where zero-day exploits are concerned.

**Malwarebytes Anti Exploit Premium adds support for PDF readers, Microsoft Office applications, and media players. Plus the ability to add and manage custom shields… at a cost of $24.95us per year.