Power Supply Units (PSUs) are probably the most undervalued component in a desktop PC. In anatomical terms, a PSU supplies the lifeblood for the PC. Without it, a computer is just an inert box full of plastic and metal. The power supply unit is critical because it supplies electrical power to every other component in the system. In my experience, it has also been one of the most failure-prone components, over the years I have replaced more power supplies than any other part. Fortunately, they have improved in more recent times.

A PSU’s basic function is to convert the higher voltage alternating current (AC) available at the wall socket to a much lower voltage direct current (DC) required by the various PC components – very similar in functionality to the AC adapters which come with most lower power devices, such as smartphones. Depending on country of residence, AC power source can be either 120v or 240v, and typical DC output is 3.3v, 5v, and 12v.

Traditionally, PSUs have almost always been positioned at the top of the case to take advantage of the natural rise of hot air which is then expelled out the rear of the PSU via its exhaust fan. However, today’s trend is moving more and more toward base-mounted PSUs. The reasoning being that the components inside the PSU are also susceptible to heat, so base-mounted PSUs will benefit greatly from the cooler air being drawn through. Many of the newer cases are specifically designed to accommodate this system, inluding provisions for base mounting the PSU.


In the image under; on the left you’ll see a typical top-mounted PSU (probably very similar to the tower you have), and a newer type case ready for a base-mounted PSU on the right: 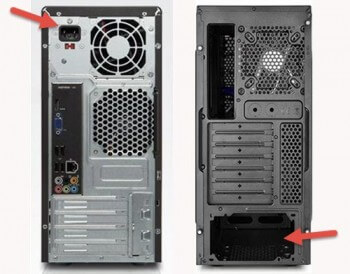 The shape and general physical size of a component is called the form factor. Items which share a common form factor are generally interchangeable – such is the case with most PSUs. Over time, there have been at least six different standard power supplies for personal computers. More recently, the industry has settled on using ATX-based power supplies. ATX is an industry specification that means the power supply has the physical characteristics to fit a standard ATX case and the electrical characteristics to work with an ATX motherboard.

In recent years the numbers of pins on several connectors have been increased to accommodate newer more powerful technology. In the list that follows, I’ve done my best to cover basic connectors for both older and newer systems:

ATX12V 4-pin power connector (aka P4): A second connector that goes to the motherboard (in addition to the main 24-pin connector) to supply dedicated power for the processor. This used to be the standard connector, however, most high-end motherboards and processors now require a 12V 8-pin connector to provide additional power. Some PSUs use the split system (2 x 4-pin connectors) to accommodate both older and newer motherboards: 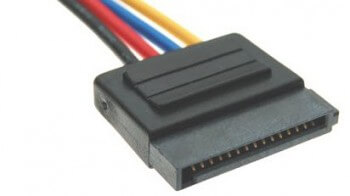 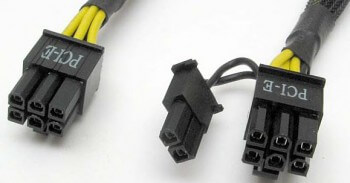 4-Pin Female Molex: Most PSUs come with at least one of these auxiliary connectors for additional power if required: 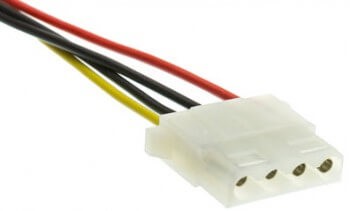 When needed, these are generally coupled with a 4-Pin male molex connector/adapter; for example to connect an additional hard drive: 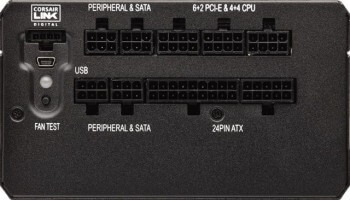 Most PSUs come with fixed cabling, however, there are modular PSUs available that come with a variety of detached cables which you can selectively connect to the PSU and then to your PC components. The advantages with the modular design are flexibility and doing away with unnecessary permanent cabling thereby reducing clutter and improving airflow. However, the modular design is generally available only in higher end PSUs and is quite a bit more expensive than the fixed cabling models.

Fixed cabling isn’t normally an issue as these PSUs are generally designed to suit most standard configurations. In a replacement situation, you may get into trouble with cable lengths for the odd PC manufacturer who tends to produce some rather radical builds, Dell springs to mind. However, this is rare and generally quite easily overcome via extension cables.

Which is best? This is a somewhat complex topic which has been keenly debated over the years. To get into the nitty gritty here would be to defeat the purpose of the exercise. Suffice to say that the consensus today is, when it comes to your average home PC, essentially neither is better than the other. So, other than for very powerful PCs full of expensive high-end components, I wouldn’t bother with multiple rail. A single rail PSU will more than suffice for the majority of users.

If you’re interested to learn more about single rail vs multiple rail, here are links to a couple of articles on the subject: 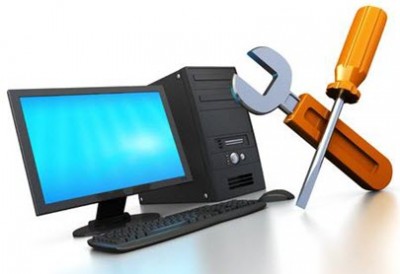 If you’re confident enough to have a go at replacing the PSU yourself, here are a number of points you should bear in mind:

One of the main considerations when purchasing a PSU is to stick with a reputable/known brand. The market is awash with generic brands, many of which are substandard and will often overstate their maximum wattage, sometimes by as much as 100%. Whereas reputable manufacturers will almost always comply with regulations and certification requirements, plus offer solid warranties. Always treat high wattage claims at comparatively low prices as suspicious.

Of course, it’s also wise to make sure the PSU has enough connectors to power all your computer components. That said, even basic PSUs generally come with adequate connections for most average configurations. For example; if you check out the specs for this middle of the road Corsair VS450 — 450 Watt Power Supply, you’ll see that it includes:

More than enough to power your average entry to mid level home PC.

Look for units with “80 Plus” certification. 80 Plus-certified units are confirmed to be at least 80 percent efficient; and the 80 Plus standard includes additional tiers for even more efficient units, including 80 Plus Bronze, Silver, Gold, Platinum, and Titanium certifications. However, power supplies at the higher certification levels tend to command much higher prices. Average users with average requirements can stick to the simple 80 Plus or 80 Plus Bronze level, unless of course, you happen across a particularly attractive deal on a Silver or Gold rated PSU.

Just out of interest, check out this high-end Corsair 1500-watt PSU which includes 80 Plus Titanium certification, modular design, plus multiple rail: CORSAIR AX1500i Power Supply – yes, they can get pretty expensive.


It’s All About the Wattage

Manufacturers usually list their power supplies’ output in watts. Obviously, it’s important to choose a PSU with sufficient wattage to power all your components. There are several online power supply calculators available where you can input your components and receive a recommended total power supply wattage. Here are links to two: http://outervision.com/power-supply-calculator and http://powersupplycalculator.net/

Rule of thumb; it’s better to go for a higher wattage PSU rather than absolute minimum to allow for power loss through heat and wiggle room for possible expansion. For example, if the combined maximum power of your system’s components is 300 watts, I would suggest a 450-watt PSU as minimum. Ideally, the PSU’s wattage should be around 40% above existing system requirements.

Replacing the PSU is not as complex as it might first appear when you open the case and see all those wires running everywhere. The power-supply cables use standardized connectors that make it pretty much impossible to connect the wrong ones. Just remember to keep the cabling nice and tidy, using plastic ties or similar, so they are not impeding airflow.

These then, in précis, are some of the most important factors when looking to purchase a PSU:

*FOOTNOTE: This article is discussing basic PSU requirements for average home users. Gaming enthusiasts and their high-end machines are another story altogether.