I often listen to music from iTunes when I’m using my MacBook.   As a result, my favorite iTunes 11 feature thus far is Up Next.  With Up Next, you can build a list of songs to listen to on the fly.  Prior to iTunes 11, if you wanted to listen to songs that weren’t from the same album or artist, you had to build a playlist.  With Up Next, that is no longer true.

Although the examples below show using Up Next in Albums mode, it also works in Songs, Artists, and Genres modes.

STEP 1: Hover over the song that you want to start off you Up Next list with until you see a white circle with a black arrow in it. Click on it.

STEP 3: Find your next song, hover over it and bring up the Up Next menu. Click on ‘Add to Up Next’ to make it the next song in your list. Repeat this step for each song that you want to have in your list. It’s that simple.

You can delete a song from your Up Next list by hovering over it until the ‘X’ appears. Click on the ‘X’ to delete it.

The UP NEXT Menu – This is brief description of each item in the UP NEXT menu. 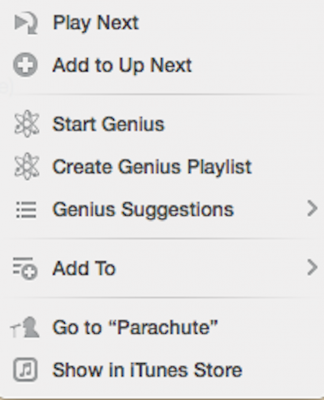 PLAY NEXT – Adds the song to the top of the Up Next list.

ADD TO UP NEXT – Adds the song to the bottom of the Up Next list.

START GENIUS –  This will clear any songs in your UP NEXT list and create a Genius list based on the selected song.

CREATE GENIUS PLAYLIST – A Genius playlist will be added to your Playlists list.  It will have the same name of the song that it is based on.

GENIUS SUGGESTIONS – This will create a list of songs that you may be interested in based on your selection.  That are not automatically added to the UP NEXT list.

ADD TO – Select a Playlist to add the existing song to.

GO TO – Goes to the album or artist.

SHOW IN ITUNES STORE – Shows the album in the iTunes Store.

As I said earlier, Up Next is my favorite feature in iTunes 11.  I really like the option of not needing to create a playlist just to listen to some random music sometimes.

Next, I’ll show you how redeeming gift cards just got a little easier.