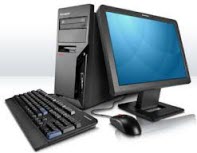 I’ve been reading quite a few opinions and predictions lately concerning the desktop computer and its ultimate survival. I read another just yesterday entitled… “10 Reasons why the desktop PC will live forever.” While I cannot disagree with the basic premise presented by the title, nor with much of the reasoning behind it, I believe a statement such as this is a huge oversimplification.

In my humble opinion, the desktop computer is destined to survive to some extent in the long term, corporate deployment is almost certain to see to that; along with serious gamers, professionals, hobbyists, and those who work from home, etc. The question is not so much whether the desktop will survive or not, it’s more about the numbers.

Over the past couple of years we have witnessed a veritable boom in tablet and smartphone sales, to the stage where these these small, versatile, mobile devices are now on the verge of dominating the market place. Logic dictates that this would have to precipitate changes in the manufacturing paradigm… it’s the simple law of ‘supply and demand’. Companies are always bound to invest majority resources in areas of the greatest growth, they are not going to commit major financing for products which are perceived as on the wane. Even Microsoft has seen the light, with the recent release of its new operating system bent on capturing the imagination of mobile device users.

Anyone who states unequivocally that the desktop is set for extinction is not taking into consideration the diversity of users and deployment which constitute the overall market place. Conversely, anyone who predicts that desktops are set to continue on as they are, or have been, is living in a dream world. In my opinion, the truth lies somewhere in between.

I believe we are bound to see a decline in desktop usage, ergo desktop sales, largely confined to the ‘home user’ element. That said, considering home users make up the majority market share, the downturn may well prove quite significant. One just cannot ignore the way tablets and smartphones have impacted on user interaction with the net and between devices. Current trends indicate that connections initiated from mobile devices will easily outstrip those made from desktops within three years.

One of the most common sense titles I’ve seen for an article based on this subject is… ”A reduced but important future for desktop computing.” Here are a couple of insightful comments taken from that article:

I couldn’t agree more. What do you think?

15 thoughts on “Is the Desktop Computer heading for extinction?”