According to a multitude of press reports, an iPad Air exploded this week in a Vodafone store in Canberra Australia, sending a stream of sparks flying from the device’s charging port and filling the store with smoke. Emergency services were called, the store evacuated, and the flaming tablet eventually extinguished. Fortunately, nobody was injured during the display of pyrotechnics – humans nil, iPad one. 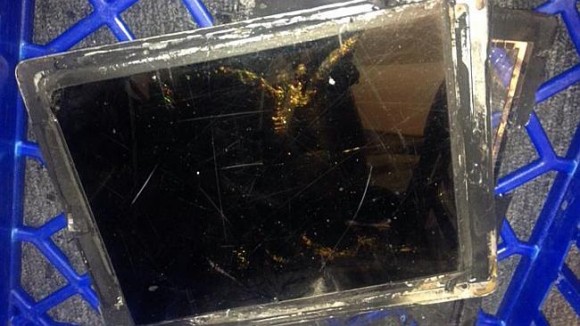 As you can see from the above screenshot, the iPad was, unfortunately, well beyond a reset. As one technical expert put it… the iPad was well and truly knackered.

The consensus of opinion is that the explosion was most likely caused by a faulty overcharge prevention mechanism. Lithium polymer batteries, the type used in iPad Airs, have a known propensity for exploding when overcharged. Consequently, most devices using these batteries have a mechanism built-in which shuts down the charging process once the battery is fully charged. This seemingly did not happen with the iPad in question. An Apple representative has apparently since been to the store and picked up the iPad’s remains for a post mortem.

There has been no official explanation forthcoming from Apple as yet and while there have been previous reports of iPhones and other brands of smartphones exploding, to the best of my knowledge this is the first reported incidence involving an Apple iPad.


The thing that amuses me most about all this – or amazes me most, not sure which – is that this story has been relayed via newspapers, magazines, blogs and the like all across the net all over the World. There are  probably many events of much more significance occurring in Australia right now, not to mention the rest of the planet, but the World press jump all over the news of an exploding iPad… go figure!

I know, I know, I’ve reported it too… shame on me. But at least it did happen in my home country.