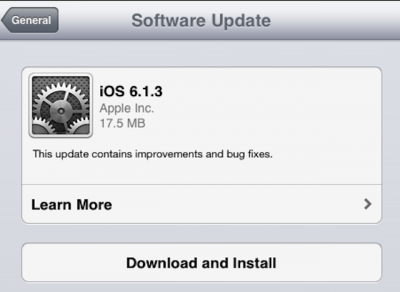 A little over a month after releasing iOS 6.1, Apple released its third iteration, iOS 6.1.3, yesterday (March 19th). Most notably, it finally resolves the lock screen bypass issue. Prior to this release, it was possible to bypass the four-digit lock screen and gain access to access the phone, contacts, photos and call logs on a device running iOS 6.1.

After releasing iOS 6.1 on January 28th, iOS 6.1.1 was released two weeks later to address an issue that impacted cellular performance and reliability for the iPhone 4S.

A mere eight days after that, iOS 6.1.2 was released to address the more widespread and problematic Exchange calendar bug that resulted in increased network activity and reduced battery life.