It seems like just about every day there is news of yet another wonderful piece of innovative gadgetry on the horizon, and the CES (Consumer Electronics Show) held recently in Las Vegas has provided a plethora of mouth watering previews to help whet the geek appetite.

How about a full Windows 8.1 PC contained in a stick? That’s what Intel has come up with from its shock and awe department. The rather unimaginatively named “Compute Stick”, which is only slightly larger than a media streaming device and can easily fit into the palm of the hand, includes 2 gig of RAM, Bay Trail Atom Z3735F processor, 32GB eMMC storage, Bluetooth 4.0, USB port, Wi-Fi 802.11 b/g/n, and a micro SD expansion slot, plus it comes with the full Windows 8.1 (with Bing) pre-installed. That’s about as close to a complete PC as you’ll get in such a tiny package.

I don’t know about you, but I am certainly impressed! This device makes it possible to turn almost any large screen which includes HDMI input into a PC with the addition of a Bluetooth keyboard and mouse – and at $150.00us, it sounds like a bargain to me. 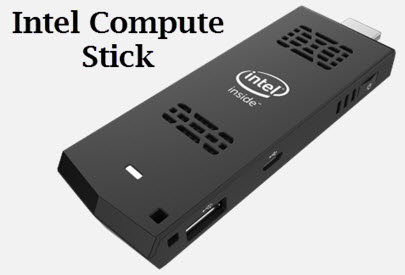 For those who prefer an alternative operating system, Intel is also planning on releasing a Linux version, although with lower specs – 1GB RAM plus 8GB storage – but, at a mere $89.00us, that is also reflected in the pricing. Intel is yet to announce which flavor of Linux will be the lucky winner but Ubuntu is being widely tipped.

The biggest issue with the stick, at least for now, appears to be that it can’t be powered over HDMI, which means you’ll need either a powered USB port or USB power adapter in order to start the thing up.

All-in-all, I just want one!! How about you?