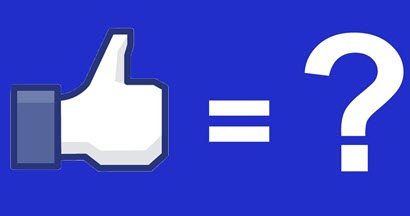 I am a Facebook user and often hear that one of the biggest complaints among Facebook users is the lack of a Dislike button.  Facebook users ask the “Like” button to do a whole lot.  Sometimes, that can be a real problem, since “like” is the only way to let someone know you saw something on their Facebook wall without writing something or sharing it.

If we can accept that the “like” button is really about letting someone know that you acknowledge what they posted, then we can dispense with the “dislike” chatter that has been going on since Facebook unleashed the thumbs-up “like” button in February 2009.  At its light-weight heart, pushing the button really says “I hear you,” “Uh-huh,” “I acknowledge this,” or “Yup.” It says, “I read this and thought about it for a second.” Frequently, or even most of the time, genuine feelings of positivity are a big part of the “I acknowledge this”—you do like the photo from your friend’s vacation or her witticism about her subway trip home. But genuinely liking it isn’t the driving force behind the click—the motivation is to let the person know that you looked and considered, rather than skimming past her posts to find a cute cat video from someone else.

When a Facebook user truly does not like a status update or a photo, the only recourse is to leave a comment or ignore it.  That initiates participation and that keeps users on the site for longer periods of time. Today’s society wants everything FAST and simple.  If you really truly dislike something on someone’s Facebook wall or want to offer your support or sympathy, pick up the telephone and call them!

Before Social Networking, people would interact with their friends by calling them on the phone or dropping by their house for a visit over a cup of coffee.  Now that Social Media is the communication standard, we can acknowledge a post on someone’s wall by clicking the “like” button.

The lack of a Dislike button will always sticks in someone’s craw – and that’s okay. It’s very limiting.  Nobody in the real world walks around “liking” everything.   It’s uncomfortable to see a Facebook friend mourn the loss of a pet or a loved one on their wall and have “liking” what they posted as the only option.

Every now and then someone petitions to bring a Dislike button to Facebook – and it always turns out to be a scam or a browser add-on that’s only visible to those using a particular browser.

Disliking, simply put is just not a part of the Facebook World. Social media is about connecting “friends” and encouraging interaction. A Dislike button would be the birth of total mayhem. As much as we all would like to have that button, Facebook will never add a “dislike” button.  You can dislike the idea all you want, but since Facebook won’t be giving you the thumbs-down any time soon, you might as well accept it.

Facebook doesn’t want its users to have a negative experience. And if someone disliked grandma’s photo of the cake she baked for the County Fair, that wouldn’t be too positive an experience, now would it? Facebook doesn’t want its users upsetting the apple cart and creating an air of negativity and the company is willing to sacrifice a user’s ability to dislike “Joe Schmoe just had a root canal” to ensure that no one dislikes Jane Doe’s pictures of her new car.