I want a Droid. That’s right, I said I want a Droid. I ignored the iPhone hype because it was an Apple product on AT&T. Since AT&T barely works on my front porch and not at all in my house, it was relatively simple to ignore the beauty that is the iPhone. Yes, it’s a nice looking phone, and the iPod touch is fun to play with (no, I don’t own one of those either), but there is enough negative-ness around it for me to safely ignore the iPhone. 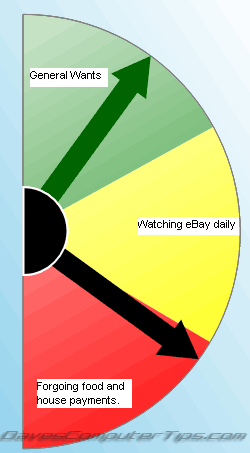 Not so the Droid. I want a Droid. There is a problem though — I still have 14 months left on my Verizon contract on my Blackberry Storm (which I geeked out over too, granted, but that’s in the past). So I’m faced with the prospect of either:

So here’s where I am. I had the graphics department whip up a diagram to visualize what I mean. Well, I would have if we had a
graphics department. So I hit Google, found something close, and used Microsoft Paint to add some labels. Either way, bear with
me. The green arrow represents where I’ve felt about the iPhone for the past several years it’s been out. The black arrow
represents my feelings for the Droid. And that line is dropping quickly.

I know, I know. It’s just a phone. But the struggles I’ve had with my Storm have led me to want something different for a while
now. And I got to play with a Droid about a month ago and I’ve been Droid-lusting ever since.

I’ve spent the past month searching eBay daily looking for the absolute best bargain I can find on a Droid. I even got my wife
convinced that this would make a great birthday gift for me, provided I sell my Storm (anyone want to buy a Blackberry
Storm?). So, step one accomplished, I moved on to eBay with a vengeance. I’ve learned something though, eBay is a scary place. 10 years ago it didn’t feel this scary.

So I haven’t found a Droid yet, but I have permission to buy one. Now I have to convince myself to spend that much money on a phone (sorry, sorry, a mobile experience in the palm of my hand).