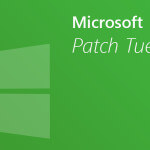 If any of you were in the unfortunate position of upgrading to the last major Windows 10 upgrade, known as the Anniversary Update, then you will once again experience that uncomfortable worm crawling around in your stomach. Yes indeed folks, come April 11 this year, that same feeling of trepidation will once again rear its ugly head in all its haunting glory.

It is truly a sorry state of affairs when the long-trusted Microsoft giant can no longer be trusted to deliver working updates to their very own operating system. Welcome to the new dawning age of, not “Aquarius”, but of , “Windows as a Service”. Based on recent exposure to these upgrades, I must say that I have a knot in my gut. Who knows what to expect?

The truth is, the next huge upgrade, roughly 3GB in size, is creeping ever closer and due to arrive around Patch Tuesday in April of this year. This upgrade, as with the last, will be doled out over several days presumably to not overwhelm their servers. I, for one, am going to defer this upgrade. Having been lucky with the last one, I do not want to test the strengths of my previous triumph.

Note: If you own a Windows 10 Home version, you will not have the same choices available to those with the Pro or Enterprise versions. I will mention a possible work-around solution at the end of this article.

If you are the owner of either the Pro version or an Enterprise version of Windows 10, then the ability to defer these upgrades is dead-simple. Here’s how: 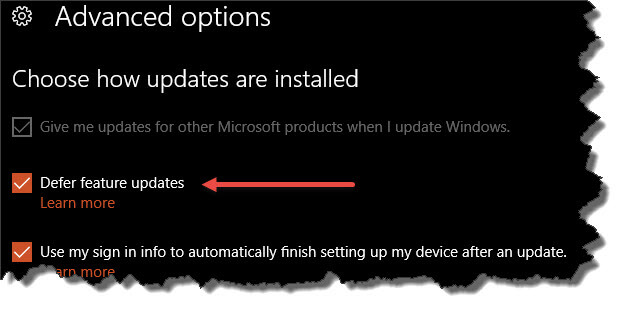 That’s it. Close the Settings App and you are done. Here is a quote from Microsoft explaining what this choice accomplishes:

“Features” in this case means anything other than Security Updates, which cannot be delayed. By doing this, you will have basically allowed the rest of the world population to become your personal guinea pigs until you are satisfied the new upgrade is indeed working as it should. It is not a foolproof solution, but it is better than nothing.

Windows 10 Home users are apparently deemed second-class citizens in the Microsoft world. This makes no sense to me, but that is a fact of life. Perhaps they see these Home users as yet another “ring” of unwilling testers for their product? I will guess that corporate greed denies the fact the product was paid for? Sorry… I digress…

In any case, there is a possible workaround if you use a wireless connection. Windows 10 seems to make an attempt at being compassionate when it comes to those of us who actually have to pay for our bandwidth on a byte-by-byte system controlled by greedy enterprises. It seems to understand that a 3GB download might actually burden us with undo charges on our phone bill. For this reason there is a box you can check to make sure these huge downloads do not cause you an unexpected financial burden. It is called a Metered Connection and can be found in the Settings App under Network & Internet–>Wi-Fi.

Near the bottom of this window you will see a toggle labeled Set as metered connection. You will want to switch this to the On position.

Note: I cannot show you a screen shot of this setting because I am connected directly to a router and the setting is therefore unusable.

Note: There is one bad downside to this solution– you won’t get security updates, either. This is a classic example of being between the bark and the sap. It’s a tight fit and one you should consider carefully.

I will continue this rant with one more observation. That is, even after the Creator’s Update (which I deem to be an ugly name), there will still be no benefit for those who own the meager Home version of Windows 10.

Unfortunately, the only real advice I can offer in this case is to be diligent about backups. For instance, you could make a complete backup of your computer before you allow the Creator’s Update to download and possibly corrupt your computer. Afterwards, if you don’t see anything you use on a daily basis as being “broken”, then you are OK.

If something did “break”, then you have a backup to resort to and after restoring your OS to its previous, beautiful, just-how-I-wanted-it state, you can then defer the update to a later time– you know– until after the guinea pigs check it out first.

I must say this has become a nightmare for Windows 10 users. I can’t imagine what the situation is like for the IT personnel with thousands of computers at their disposal which all must be maintained and kept up to date. Egad!

I like the idea of Microsoft’s vision of Windows 10 “as a service”. It makes life easier for both them and us… at least that’s the way it’s supposed to work. Unfortunately, it hasn’t gone that route and it may not change for the better in the near future. Who knows what may happen.

I certainly don’t like the forced updates concept, especially when you can’t count on their integrity. I much prefer to have at least a modicum of control over what is placed on my computer, and to be able to make my own mistakes, thank you very much.

I am going to defer this particular upgrade and see what shakes loose in the interim. How about you?

34 thoughts on “How To Defer The Scary Creator’s Update”