In the beginning, my first choice for anti-malware was Ad-Aware. That is, until they came out with the 2007 version. A complete overhaul of the interface, and the program was never the same again. I ended up fixing more problems caused by Ad-Aware than by the malware itself. I stopped using it after that and never went back.

When I first heard of Malwarebytes, I refused to download it because there was a fake scanner program going around at the same time with a similar name. Eventually, I realized it was a legitimate program and decided to give it a shot. It is now my first recommendation.

One issue I did have before was that Malwarebytes would automatically install the Premium Trial Version without giving you the option to opt out during the installation. This time, it installed the Free Version.

Don’t you hate it when things go right when you expect them to go wrong?  🙂

How To Deactivate the Premium Trial Version

Anyway, if you installed the Premium Trial Version by accident, and want to switch to the Free Version, just open the program. 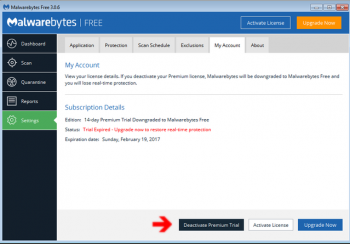 16 thoughts on “How To Convert Malwarebytes Premium Trial To Free”