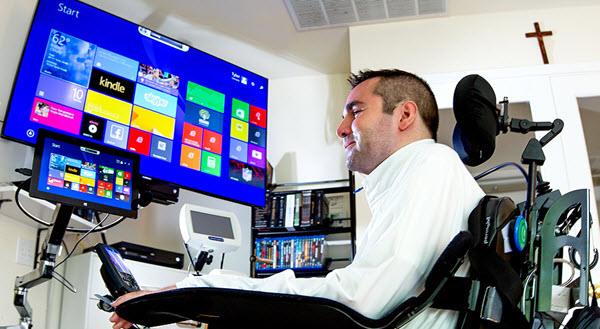 Modern technology is simply awesome, I often reflect on how much of today’s technology would have been so very useful during my working years. What most of us take for granted though can often be an extremely difficult exercise for those less fortunate.

Such is the case with this feel good story about 29 year old Tyler Schrenk who suffered a life changing injury two years ago. Mr. Schrenk was  paralyzed from the neck down following a diving accident and even simple everyday activities, such as opening an eBook or reading an email, became excruciatingly tedious chores.

That was until Mr. Schrenk met Microsoft software engineer Jose Blakeley last year through their local church, and together, they began to improve those technological links. Mr. Blackely introduced the severely incapacitated man to the Surface Pro and Windows 8’s speech recognition software, along with a voice-operated mouse and various other features to help him interact with the system. 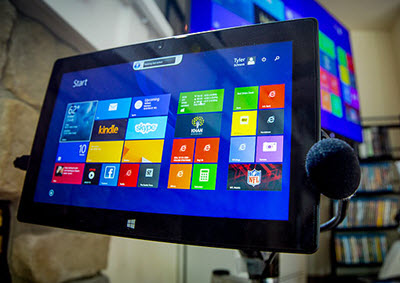 Mr. Schrenk quickly got the hang of things, but a few bumps needed to be overcome along the way. Mr. Schrenk’s respirator, pump and air conditioner all generated so much background noise that they interfered with his voice commands. However, the two men came up with a solution and Mr. Blakeley attached the Surface Pro to Mr. Schrenk’s wheelchair along with a connected Koss C100 microphone to help overcome the interference.

After that, it was pretty much smooth sailing, “I can do a lot more of the things that I used to do before,” Mr.Schrenk says. “I can handle more of my own stuff.” From reading e-books and working in Microsoft Office, to browsing and searching the web, the set-up has given him far more freedom to engage with the digital world. “If nothing else, the Surface opened my eyes,” he added, “and I realised the possibility of doing much more than just occasionally checking my email.”

Mr. Schrenk also has an Xbox One connected to his flat screen and uses its voice command capability to watch television and movies. “It’s cool,” he says. “I was able to use it out-of-the-box, without any upgrades.”

It’s a great story, and one which represents a change from all the negatives we have generally been used to hearing regarding Microsoft’s recent innovations. A change for the better methinks.