I had a moment of hesitation when coming up with a title for this topic, because violence in itself is a very broad concept in the real world and manifests itself in so many different ways. Video games have a long history of pushing the boundaries of what is acceptable in society today and care should be taken not to blur the lines between fantasy and reality.

Most gamers are not scientists, psychologists or statisticians in their daily lives – there may be a few of course – and it appears that the jury is still out as to whether violent video games are the cause of some of the incidents witnessed in recent years. I’m neither qualified nor comfortable in passing an opinion on this juxtaposition in much the same way as I wouldn’t pass judgement on how a mechanic balances the carbs on my bike. What I do know though, is that video games come in for a lot of criticism on numerous levels, much of it from those who have little or no in-game experience, and many games sparked controversy at a time when realistic computer graphics were in their infancy… with many commentators linking such video games to behavioural problems in young male adults and with particular regard to some very tragic school shootings.

In 1994, the self regulating Entertainment Software Regulatory Board, ESRB (USA) was formed, partly in response to this and whilst the regulations are not enforced by law, software companies view it as a de facto standard within the games industry. In the UK there existed the delightfully named British Board of Film Classification, until the Pan European Game Information PEGI standard was set up in 2003.

Rise of the Shooter

In the early 90’s when Wolfenstein 3D, DOOM, Night Trap and Mortal Kombat were unleashed into the gaming community, they set the standard for the modern action game and yes, they  contained violence by their very nature and prompted calls for the regulation just referred to.

First person shooters (FPS) were more or less invented by iD Software and their popularity has remained to this day. Probably what has changed most over the years is the level of realism which has  reached the point of cinematic quality, giving the games a look and feel that can only have been imagined twenty years ago.

As I recall, the first computer game I ever played was text based by the name of Jacaranda Jim, where the story unfolded simply by the input of green text on a black screen. At the time I had no idea that a more visceral form of entertainment existed until one day I was browsing in a computer shop and saw demos of Tomb Raider and Incoming. By the time I’d got the new PC home, unpacked it and played the first level of Lara’s adventures, I was hooked and my relationship with computers changed for ever. I began to spend an inordinate amount of time in PC shops and superstores browsing the games and counting down the weeks to the next release of a 3DFX video card. The PC became the most important medium of entertainment for me and at the time, the genres I chose were FPS and other third person action games such as Tomb Raider.

Progressing through an action game generally involves disposing of the enemy somehow, whether it be by using guns, bombs, vehicles or a plain old dagger to the throat. It’s a dog eat dog scenario and as I look back, I can’t honestly remember if any of the virtual kills actually registered in my psyche in any meaningful way. That is to say, it never registered as violence per se, more a means to an end to unlock some puzzle, run through a doorway or pull an all important lever.

A means to an end or simply gratuitous?

This is a question that helps in some way to distinguish why the violence is there in the first place. Gratuitous violence could be that which rewards you for killing as a major component of the game, as has been done in Carmageddon.When that game was released, I remember thinking terribly self righteously how degraded that game must be to reward players so many points for running over helpless grannies. A little later of course, having retired to the living room, I would choose to watch Hannibal Lector feast upon a live human being or subject myself to the Tarantino treatment in Reservoir Dogs, both examples of which I have found to be personally more abhorrent than any video game I’ve ever played.

But heck, that’s just me; it doesn’t take much to get me hiding behind the sofa and the big difference between a video game and 35mm celluloid, is that a game allows you a modicum of control; sometimes with the content (less gore) and often with the progress and outcome of the game.

The newest outing for Lara Croft was released in March 2013 and a few months beforehand, Crystal Dynamics executive producer Ron Rosenberg made a comment that Lara would be raped, in reference to a particular scene in the game. Numerous u-turns and back pedals rushed to the fore, to the point where the publishers actually said that the word rape has no place in the game and God forbid that they would ever imply our innate desire to protect Lara in such a situation. 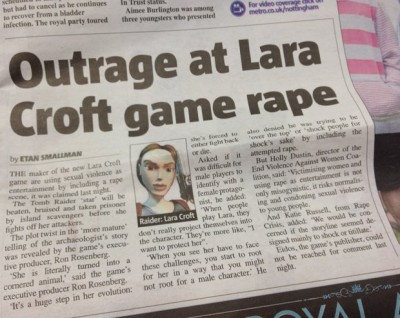 The media reaction to this non event was extraordinary more for its bone chilling hypocrisy than any feeble attempt at political correctness. The fact that a rape never took place at all seemed to escape their notice and jumping all over an executive who dared to mention Lara Croft and rape in the same sentence smacks very loudly of double standards at the very least and the notion that players wouldn’t want to protect Lara, is bizarre.

The games media have absolutely no problem in ratcheting up our excitement when reviewing games containing torture, body dismemberment, gore splattered scenes and the gratuitous mowing down of pedestrians in the pursuit of kicks, but make any reference to a real life, totally real fact of life and they’re running for the trees.

I have to admit that I can’t remember the last time I read a serious attack on a feature film because it contained scenes of sexual violence. They probably exist in the same way as female genital mutilation, gang rape and cannibalism do in the real world, yet remain in some taboo hinterland for the very reason that they exist, unlike Lara Croft, who doesn’t.

Why are many video games violent?

Perhaps because many would be pretty dull if they weren’t; it’s the nature of the beast and for many gamers it’s probably the one big escape to experience an out of world event. Choosing the weapons, the place, the time and the difficulty is the big control and this is what many gamers love about gaming. I mean, it’s not often that you get the chance to blow up an APC with an RPG is it? Or plant a bomb at the feet of a large public building, run for cover and enjoy the fireworks?

The other night I’d just finished up an enjoyable session with Max Payne 3, battling my way through a Favela in Rio de Janeiro, jumping from walls, dodging bullets and feeling quite happy that I’d survived.

Later, on the TV we saw Jack Bauer, he of 24 fame, shoot one of his friends in the back of the head and countless mercenary terrorists commit heinous acts upon innocents somewhere in LA.

That night, it wasn’t Max Payne 3 we were discussing.

6 thoughts on “Are Video Games too Violent?”