Expectations were high for Wolfenstein: The New Order, very high. After all, following in the footsteps of Wolfenstein 3D (1992), Return to Castle Wolfenstein (2001) and Wolfenstein II (2008) was always going to be a challenge and if you’re a die-hard shooter fan, this game doesn’t disappoint.

The year is 1960, the Nazis are triumphant following their defeat of the allies in 1946; the USA has surrendered, many countries are in ruins and the technologically advanced army of General Willem Strasse-aka Deathshead, terrorises all who would stand in its way, remodeling the world in an image of the Third Reich.

Playing as American war hero, Captain William. B.J.Blascowicz, you must stand up to the Nazi super-soldiers, robots and torturers and in doing so, endeavour to turn the tide of history. 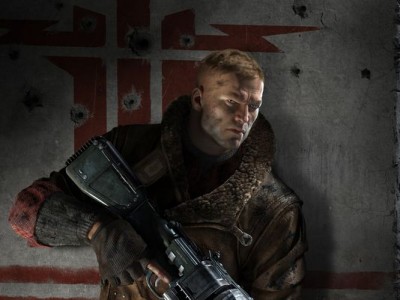 In a series of missions, your ultimate aim is to destroy the evil Deathshead, whose use of the occult, systematic torture and advanced robotics has enslaved the global population and must be stopped.

As far as any game plot goes,developer Machine Games have worked hard to give B.J a more believable persona than in previous Wolfenstein games and it works in as much as games today are more story driven than ever before.

As you play through the missions, you really want our hero and his resistance fighters to emerge triumphant in the face of insurmountable odds, whilst our villain-in-chief, Deathshead, has very real and sinister overtones to Mengele and others of his ilk who once perpetrated unspeakable evils in the name of Aryan purity. 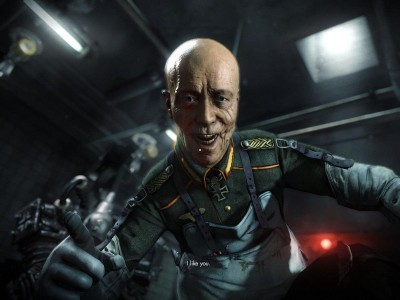 The what if ? conundrum runs through this game from the very beginning.Perhaps it’s not a question you’ve asked yourself many times or perhaps you once read Fatherland  or watched Iron Sky and maybe just wondered a little; but it does prick that nagging question.

Overthrowing the evil empire and righting the wrongs therefore, is central to the essence of the game and whilst this is standard comic book fare, the Nazi hook is there and it’s a powerful hook. 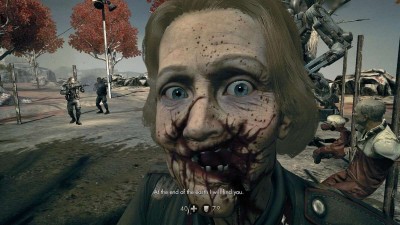 An intelligent use of cut scenes and at times, some very disturbing portrayals of Nazi brutality, is a reminder that the villains in this game bear a factual resemblance to real people and real events of the past, without minimising the horror or trying to skirt around the issue.In fact, when some of the cut scenes are played, you may start to ask yourself ‘do I really want to see this?’ One cut scene involving a very small baby is a case in point.

The opening of the game throws you directly into the action and whilst much of this is a cut-scene, it’s a blessed relief to discover that it’s not plagued by the dreaded quick time event or QTE, a gameplay method that should have been strangled at birth.

We are also introduced to one of the game’s main characters Fergus Reid, a larger than life Scot with the Parachute Regiment, whose likeability is only matched by his abrasive and can do attitude. It’s a credit to the devs, that they chose to immerse the player in the game from the very beginning and it sets the tone for the rest of the game. 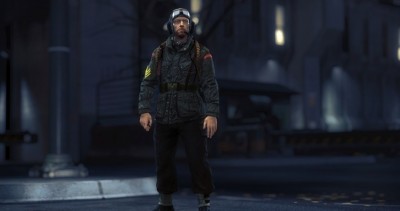 As B.J, you quickly feel part of the team, although your actions are not entirely dependent on your comrades, and at least you don’t feel totally alone in the same way as say, Gordon Freeman did in Half Life.

Soon enough a welcome array of weapons becomes available, including the option to dual wield assault rifles, knives and handguns a la Duke Nukem and not forgetting the so very Nazi model 24 ‘potato masher’ stick grenade, which when lobbed into a room full of German soldiers, is deliciously satisfying. In fact, BJ’s arsenal of weapons isn’t restricted, except for the Uber-weapons picked up from dead Ubersoldaten. Letting loose these weapons is enormous fun; they feel good in the hands, the noise is tuned to perfection and since the objective is to kill as many Nazis as you can, the effect is gib inducingly gratifying. 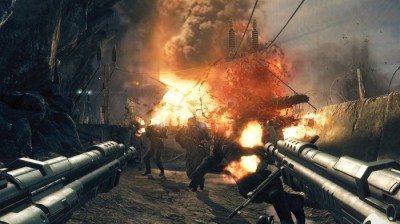 Health packs and armour are plentiful and very novel in their style, so it’s not very often  that you’ll find yourself gasping your last breath.

Collectibles, secrets and newspaper clippings are to be found as well as a handful of Easter eggs, which take a little more effort to uncover, but are well worth it for the kicks and surprises they contain.

The general pacing of the game is well thought out and when the shooting stops from time to time, some interesting back stories emerge, which bring the central characters into focus, to such an extent that they become less of the parody so often portrayed in the cinema and you really begin to believe in them. You also get to shoot Nazis in a variety of  locations around the world and another that isn’t of this world, yet not entirely unbelievable.

The enemy AI is a little suspect at times, which makes sneaking up behind a Nazi with dual wielding knives a little too easy, especially when the soldier is almost staring right at you as if he’s asking you home for tea.

But the stealth does have its rewards and helps to build up your skill levels, not to mention avoiding alarms and reinforcements being called.

Being stealthy around a Panzerhund however, takes a little more skill. 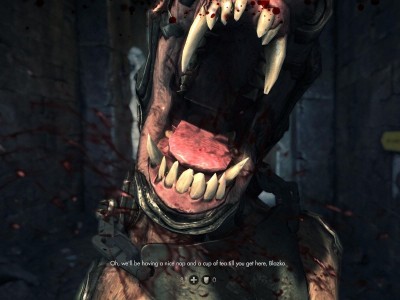 Being thrust into a game from the get go is always a good sign and Wolfenstein wastes no time in introducing you to the main characters quite early on and as the game progresses, the narrative doesn’t let up at all and keeps pulling you in.

The dialogue is well constructed, albeit a little cheesy at times and certainly adult in some of its content, but it’s never really over the top and melds well with the atmosphere of the game. 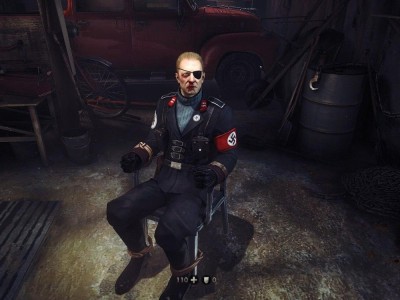 In keeping with the theme, the Nazi soldiers speak almost entirely in German and more than once they’ll shout schweinehund! at you when you shoot at them or throw insults at you in heavily accented English.

Each of the characters, or at least the good guys, connect with one another and sometimes it can be very touching, particularly the relationship between BJ and Anya, who find each other in a world they can’t recognise, but probably belong in.

Visually, the game is lovely to look at and it does need a powerful gaming machine to run at its maximum settings.

Wolfenstein is only the second major game to utilise the id Tech 5 engine after Rage and whilst the overall look of the game is quite stunning, it’s surprising to see that many of the surface, wall and other textures look like very low quality oil paintings. The texture detail given to weapons and characters is beyond reproach and to find such washed out textures in a game of this calibre, running alongside game engines such as Cryengine 3 and Frostbite 3, is disappointing to say the least. 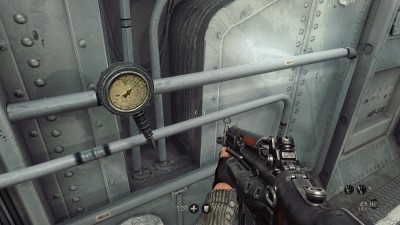 Collecting health and armour can also be a chore as you need to click on it to pick it up, but maybe this is merely a throwback to games of yore and isn’t a serious niggle, but it does interrupt the flow of the gameplay somewhat.

The music in Wolfenstein is a mix of fake German rock by Neumond Recordings as it might have sounded, should the Nazis have won the war and the main in-game theme is a heavy metallic sound by Meshuggah which spangles the gameplay throughout.

Wolfenstein: The New Order brings the first person, single player shooter, screaming and blasting its way back from the 90’s in some style and then some more.

The game’s mission and whole reason for being is shooting your way through hordes of Nazis, getting the girl and placing the world back to its equilibrium and in this, it doesn’t pretend to be anything else and neither does it need to.

A first person shooter at its very best. 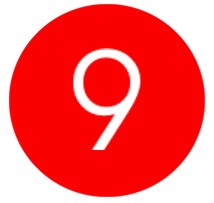