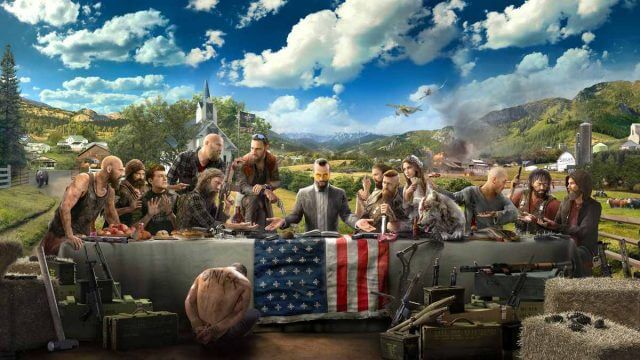 When the story line for Far Cry 5 was revealed more than 18 months ago, it sparked a huge debate in the gaming community, largely triggered by groups of moaners referred to as snowflakes, prompting me to write an article in an effort to explain that storm in a teacup, which you can read here:  Far Cry 5 Religious Cult Theme Causing Furor

Apparently, they were upset by Christians being depicted in the as yet unreleased game, as violent, gun-toting hypocrites and it simply wasn’t fair. On the other hand, the depiction of the residents of Hope County, Montana where the fictional game is set, also caused an outcry because they are shown as uneducated rednecks who rise up against the cult and kill white American Christians. And that’s just it– everyone has a label today whether you like it or not, and a game developer having the temerity to wade into the sensitive underbelly of American insecurity provoked a spark that went viral. Suffice to say that Ubisoft ended up making their most successful game to date without a character once mentioning Christianity, either in the dialogue or the game setting, so who’s laughing now? 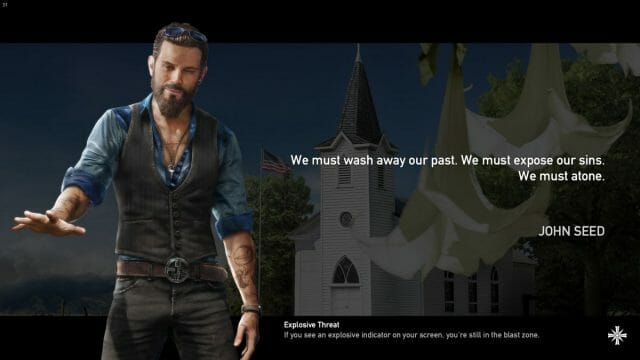 In sleepy Hope County, Montana a fanatical doomsday cult known as Eden’s Gate takes over, inculcates itself into society and follows the path of any contemporary self respecting cult by converting the locals to their way of  living by any means possible. Naturally, this being America, guns are involved– lots of them. Much like the real-life Rajneeshpuram of Antelope, Oregon in 1981, the locals are somewhat miffed at their way of life being turned upside-down, but this time, and since it’s a video game, they arm themselves to the teeth and take the fight to the cult in more fun ways than you can imagine. Liberating cult strongholds, setting captured citizens free and killing Eden’s Gate’s founder, one Joseph Seed, are therefore the primary objectives of Far Cry 5 and this can be achieved in a variety of thrilling and violent ways. 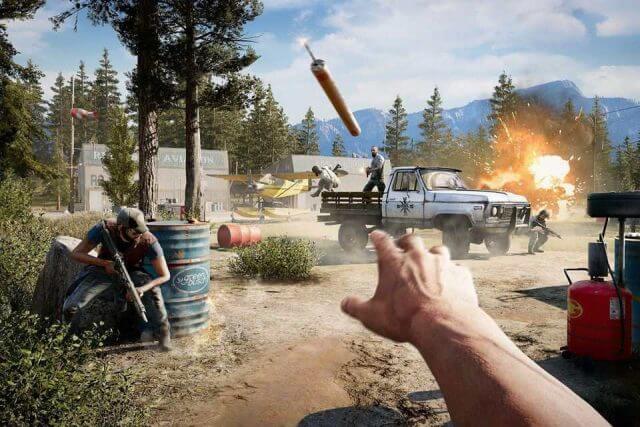 The game intro, which is almost a ten minute cut-scene is one of the most dramatic I’ve seen in a game. As a rookie police officer you accompany the federal marshal to arrest the Eden’s Gate leader and predictably his detention doesn’t go according to plan. Here’s the intro if you don’t mind spoilers.

This sets the scene for the tone of the game and it’s no surprise that the cult turns out to be a bloodthirsty bunch of bible-bashers (minus the brown leather sandals, tofu and handfuls of lentils) and if you don’t repent your sins, you’ll get your head blown off. This then leads to the locals forming a militia in order to recapture villages which have become cult strongholds and fortresses. It’s not clear whether they actually indoctrinate the locals, because you never actually see anyone worshiping in the local chapels. As I progressed through the game, throwing sticks of dynamite at cult RVs and petrol stations, I couldn’t help feeling that the story lacked bite. Although the cult members come across as crazy SOBs, I couldn’t really rationalise their blood lust with any real purpose, which remained foggy to me throughout the entire game. I know they want to kill me, but I don’t know why. Perhaps they’re fighting for the survival of the cult, or is it because they conceal a dark secret that cannot be discovered under any circumstances? 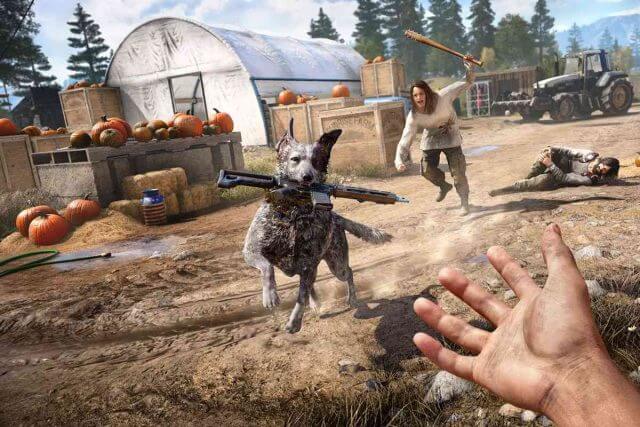 I would have preferred the latter, although since I haven’t yet finished the game, maybe the controversial ending will reveal all. Who knows? Mind you, this got me thinking about cults and the following statement from Rick Alan Ross, the American cult expert, brings home the bizarre reality of cults in the USA.

“I can tell you that right now there are towns in the United States that are controlled by groups called cults,”

According to this article in Fandom, where Rick acted as a consultant in the development of the game, cults are very much alive and well, brainwashing Americans all over the country. But is that reason enough for me to want to kill them all? Are they raping, pillaging and herding up our women and taking them as concubines? I haven’t seen any of that yet and doubt that I will, since the objective of the game is pretty formulaic on the whole. Capture cult strongholds, release prisoners, recruit buddies, rinse and repeat. 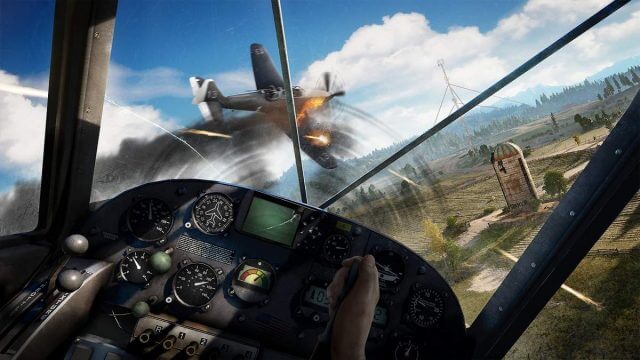 In the end though, it’s best to play the game as it was intended. Steal fighter planes, helicopters, RVs and other vehicles, to cause as much mayhem as possible, taking the battle to the cult and eventually bringing down their three principal leaders. This can be achieved in a variety of ways, through missions or simply by roaming around the vast open world of Hope County. With the introduction of armed helicopters and WWII aeroplanes, the job of blowing the cult to kingdom come becomes a full on mini world war in a small corner of the USA and since I’ve always wanted to drive an eight-wheeler, I was particularly pleased to find a mission that involves rescuing one from the cult and driving it back home at full pelt through a blaze of gunfire and cult roadblocks, cutting a swathe of death and destruction before me. Especially since the truck is fitted with twin machine guns on the wheel arches. Unfortunately, a few moments later, my truck was blown to smithereens by the cult and is now effectively beyond repair, even with my magical blow torch. 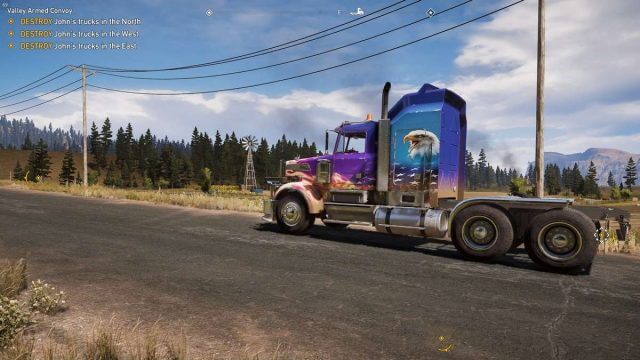 This may sound a little odd, but I do like a linear shooter, but this game is not that by a long shot. I know the purpose is to eliminate the cult in all their territories, but I also like to see clear objectives in a game with cause and effect. For example, if I recover a cult stronghold and discover some vital clue, a secret device or map, will that affect the rest of my progress and open up other paths of progress through the story? Not really, and in the end, Far Cry 5 does what it sets out to do with fantastic visuals, real-time dynamic weather, rampaging enemies that do nothing more than rampage, particularly when they’re high on Bliss (a psychedelic drug dotted around the landscape), and it’s an absolute scream to do just that. But I feel that in the end Ubisoft has copped out, not grasped the nettle and left the game several steps short of the controversy it intended in the first place– the so-called war between religious cults and armed militia. But more importantly, the real indoctrination that takes place when gullible folk are sucked into such anachronisms. I needed to feel real resentment and indignation towards these Scientology look-alike fanatics, but sadly, all I felt was a need to defend myself because that’s what you do when a crazy gun-wielding nutter goes for you. As a result, I haven’t become truly hooked on the game and dip into it when and if I’m in the mood, which for me is usually an accurate gauge of a game’s staying power. On the other hand, if you feel like a rest from blowing people’s brains out, why not go fishing instead? 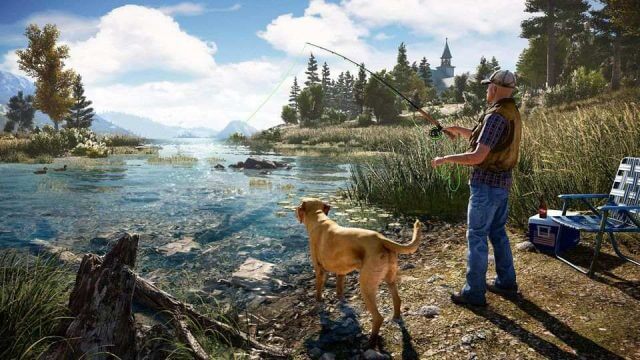 Before I close this review, it’s worth pointing out that you should definitely double check which CPU your computer is fitted with, because if it’s an AMD Phenom based processor or below, you’re out of luck because the game won’t run at all due to the minimum requirements of the Denuvo anti-cheat layer slapped onto the game, as outlined in this article AMD Phenom Owners Plagued By Crazy DRM Issues. Nice one Ubisoft! Why not do the right thing and issue a patch just like all your self-respecting competitors have done? Unfortunately though, I hold out little hope of that ever happening.