A drop in market share of 2.81% over 6 months might not seem all that significant but, putting it in perspective, that equates to a decrease of around 15% in Firefox’s user-base, which does involve substantial numbers.

A number of factors appear to be contributing to Firefox’s declining market share, not the least of which is the growing popularity of its main competitor, Chrome. Plus Mozilla’s apparent failure to deliver on the promise of a lighter and speedier Firefox. It’s ironic that one of Firefox’s most appealing features, the huge numbers and variety of add-ons, also contributes largely to its greatest criticism. 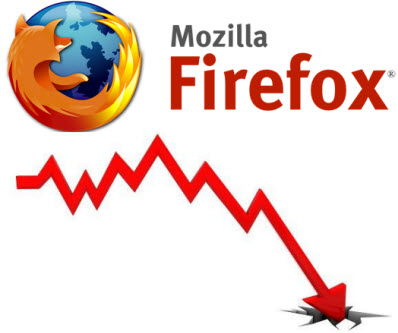 It’s a lot more difficult to fathom why the downward trend appears to be accelerating of late, I can’t help wondering if Mozilla’s handling of the Brendon Eich fiasco might have exacerbated the situation.

For those not in the know; Brendan Eich is the former Mozilla CEO who was sacked recently after accusations of homophobia. At the time, Mozilla claimed Mr Eich had resigned and was not sacked, but if you believe that then you believe in the tooth fairy. Even if the former CEO did in fact tender a letter of resignation, I’ll almost guarantee that he was “advised” to do so.

The sacking was perceived as grossly unfair in many quarters and created a storm of protest, with many commenters vowing they would never use Firefox again. At the time, I dismissed it as mostly idle talk but perhaps they’ve been good to their word. This all took place in early April, so the timing would certainly suggest so.

Whatever, I doubt Firefox is heading the way of its predecessor Netscape just yet, but these latest figures should definitely be ringing alarm bells in the Mozilla camp. If Firefox is to remain a power among web browsers, Mozilla needs to act, and it needs to act now.

Why do you think Firefox’s popularity might be waning?