One of the killer features of WHS V1 was named Drive Extender. Drive extender technology allowed multiple drives to be added to a computer, but they were viewed by the OS as a pool of storage or one large drive. Drive extender also included the ability to automatically duplicate folders for redundancy through a feature called folder duplication. In WHS V1 if you had two drives, or more, in your computer folder duplication could store two copies of a folder, and the files within, on two separate physical drives. This was done seamlessly and in the background with no user intervention other than enabling the option. Normally a drive failure would result in loss of data, but with Drive Extender and the folder duplication feature the data would be duplicated on a second drive preventing data loss. You could think of this as a poor man’s RAID solution, and many referred to it as such.

Fast forward to 2010… Microsoft announced the second version of WHS, code named Vail (released as Windows Home Server 2011), based on Server 2008 R2 and some new additions to the line targeting small businesses based on the WHS code. Drive Extender was expected to continue to live inside WHS Vail and find its’ way into the new business line with possible inclusion in other Windows versions. Unfortunately, later in 2011, Microsoft announced they experienced issues when using Drive Extender with certain business software. Based on the shared code between WHS and the new small business line they made the decision to drop Drive Extender from WHS completely. The internet uproar among enthusiasts was great. Many complained that Drive Extender was the core reason to run WHS while others stated they would flat out not upgrade to the new WHS without it. I understand Microsoft’s decision and there are other methods to achieve the same end result, but having Drive Extender built into WHS was a simple and straight forward solution for many that was built into the OS.

As a result of Microsoft’s decision and urged on by the internet grumblings regarding the lack of Drive Extender a company named Division-M from Australia began working on their own solution. A solution that would make Windows Home Server “whole” again with the added bonus of not being tied to any one particular Microsoft OS. 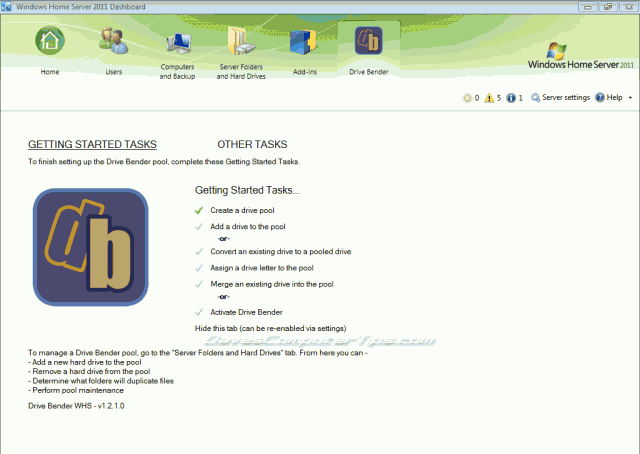 Here’s what Division-M has to say about Drive Bender:

What is it?
Drive Bender is state of the art, single point storage pool technology for Microsoft Windows. Drive Bender presents multiple hard drives as a single pool of data storage, either as one or more drive letters, or a network shared drive. Drive Bender is able to do this with any drive recognized by Windows, including external drive such as USB, Firewire etc.

Drive merging and converting
Drive Bender also offers a merge capability, allowing users to take a drive that contains data, and merge that drive (and data) into the pool. In addition there is also a drive conversion feature. This can take and existing drive letter (mounted against a physical drive) and convert this into a pooled drive. Once completed, new hard drives can be added to expand the once fixed drive.

Data redundancy
To further ensure data safety, Drive Bender can automatically duplicate any file added to a Drive Bender pool. File duplication is determined at the folder level and occurs on the fly as data is being written to the pool. More importantly, files are only duplicated across physical drives ensuring maximum safety and data redundancy.

Non-destructive
One of the key Drive Bender features is its non-destructive file system technology. In short, this means that all drives within a Drive Bender pool are utilizing standard NTFS format and file structures. This is to such an extent that a drive can be pulled from the pool and read on any machine capable of reading an NTFS formatted drive. More over, drives attached to the pool can be done so without modification, if a drive is added (not merged) that contains existing data, that data will remain untouched.

Ease to try
Because of our non-destructive file system, taking Drive Bender for a test drive is easy. Simply specify the drives to be included in the pool, and you are ready go. The drives are not formatted (unless specified), the only change made to the drive is the addition of a folder that holds the contents of the pool and a small number of configuration files.

The technology
Drive Bender employs existing, proven kernel mode file system technology. Having spent many years developing kernel mode drivers, we are able to use this experience to great extent. The end result is a product whose performance will closely match that of the underlying drive.

Drive Bender doesn’t come without a price, but it is surprisingly reasonable at $40 with life time support and maintenance. This is well worth it for the Windows Home Server crowd and anyone else looking for an easy to expand storage solution with “set it and forget it” redundancy!

So what do you think? Is this worthwhile on the desktop? Will this level the playing field for WHS users waiting to upgrade to WHS 2011?

3 thoughts on “Drive Bender: Drive extender technology for all”