I received an email today that sent shivers down my spine! You’re probably thinking the worst. Death in the family? Close relative exiled to Siberia? No, not quite that bad, but for anyone who works in IT it is close! 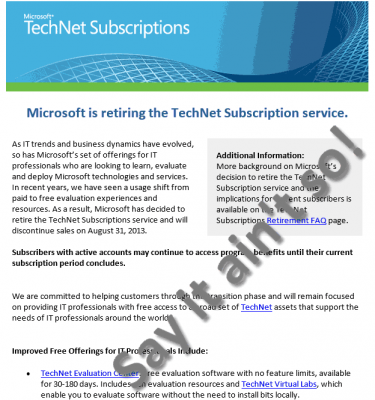 The email I received from Microsoft

Microsoft is closing their TechNet program. I imagine you’re asking yourself what is a “TechNet” and why should you care right about now. TechNet is a program that allows IT professionals, blog writers, and other techies licenses for most Microsoft software at an inexpensive rate of around $250 per year. Windows 8? Yup. Office? Yup. Server 2012? Yup. Even obscure titles like DOS and Windows 3.1, which I’m sure you know hasn’t been readily available to the general public in a very long time are available. Sounds like a good deal, doesn’t it? Working copies of practically every single piece of Microsoft software ever created for only $250. It is, but there is much more to it and it does affect you in many indirect ways.

As IT trends and business dynamics have evolved, so has Microsoft’s set of offerings for IT professionals who are looking to learn, evaluate and deploy Microsoft technologies and services. In recent years, we have seen a usage shift from paid to free evaluation experiences and resources. As a result, Microsoft has decided to retire the TechNet Subscriptions service and will discontinue sales on August 31, 2013.

Well, that’s what they said in the email. Terms like dynamic and evolved sure make it seem like Microsoft has their hand on the heartbeat of the IT industry, doesn’t it? Well, truth be told I believe it has more to do with piracy. In the past Microsoft allowed 10 licenses for each product and it wasn’t uncommon for unsavory persons to buy several memberships, grab 10 Windows licenses for each membership, and sell them on eBay for $40 each. To combat this Microsoft changed the terms of service and only allowed 2 licenses per product a few years ago. Unfortunately, this only hurt those who really used their TechNet subscription, after all thieves will find another way.

Piracy, or not, who the hell needs 10 licenses?

In my case I use the licenses to create virtual machines of the popular operating systems and servers. This allows me to work and tinker with each one without affecting my main computers. When I get a question about Windows XP, Vista, Win 7, Win 8, or Home Server I can fire up a working copy in a VM and see exactly what the user is asking without having a dedicated computer setup. When I experiment with an operating system feature so I can explain it in a DCT article it is in a virtual machine running a TechNet licensed OS. Virtually every screen shot of Microsoft software I’ve taken for DCT has been made possible due to the TechNet service.

It is also a common practice among IT folk to have very diverse test setups allowing them to experiment with various settings and very complicated systems like Microsoft Active Directory controllers, Exchange servers, SQL servers, etc – all the things that make businesses run. This allows them to learn the products, their intricacies, and interactions with client operating systems, like Windows, so they can use them effectively or explain their use to others.

It was a great resource for myself and many others who would otherwise not be able to afford the software – A single copy of SQL server or Exchange server can run up to $5000 EACH. So yes I am complaining about the loss of thousands of dollars worth of software that made my life easier, more productive, and helped me help DCT readers. I am not alone in my feelings…

…During my two years with my employer, I have audited software, explained what an Action Pack is, why we need more licences, why a TechNet subscription is not the answer to licence shortfall, purchased more legitimate licences, recommended Lync, Office 365, Windows 7 and 8, Server 2008 R2, 2012… Pushing now for 2012 R2 and 8.1..

…leaving aside the test lab at work, I run Hyper-V on my Windows 8 home PC and currently have 12 VM of varying setups so I can have a play with various things. My first 2012 AD VM dates back to November last year and still gets regular use, so 30-90 days trials are no use to me at all, rebuilding my AD domain every couple of months doesn’t appeal in the slightest.

…It seems like their excuse is “oh, but it’s alright, because we have these other facilities which allow you to do these things!”, without recognizing that they don’t meet the needs of many of us in real life.

Microsoft is “shooting themselves in the foot” again! Why? The people that use TechNet legitimately are the same people family members, co-workers, and friends come to for advice and leadership. These are the people that implement, improve, and solve problems for business systems running tens of thousands of dollars worth of software. The people who fix their family’s computers or advise them what to buy. These are the people who really need access to the software provided by a TechNet subscription.

In an effort to appease the throngs of unhappy subscribers, has stated they plan to offer software downloads with 90 – 180 day evaluation licenses in place of the TechNet subscriptions. Gee Thanks, Microsoft! Can you imagine having to reinstall 4 or 5 operating systems every 3 months – including the updates? What about reinstalling and reconfiguring an entire network in the case of Active Directory? Not well thought out, Microsoft.