I reckon it depends on your definition of cheating and to put your mind at rest, I’m not banging on about two-timing your girlfriend, keeping a mistress in a love nest or falsifying your tax return. Having said that, in certain countries such as France for example, keeping a mistress is said to be de rigueur and in some Arab and African countries, taking several wives. I’d find that all rather tiring, not to mention the vast expense and interminable yacking. Imagine for a split second what it would be like to be in the same room as your seven wives, all arguing which one was going to sleep in your bed chamber that night. It doesn’t bear thinking about does it? But it sure brings into focus the largely subjective stance we take on cheating per se. It would be an interesting exercise to go all agony aunt here and invite you all to write in begging for advice on how to handle your cheating wife or blackguard husband, for it would be sure to elicit both a laugh and a squirm from our readers. In fact only the other day I was having a beer with an old mate, as you do and all of a sudden he blurted out that his wife had been having an…………….

See what I mean? It’s so easy to get side tracked and there are times when I think I may have a brain the size of a canary, so easily distracted that I am. But no, if you’re a gamer, (and please stop yawning there in the back row) you’ll know what I’m talking about. It’s not all wailing and gnashing of teeth you know, but gamers take cheating very seriously, like it’s life and death or something. I’m talking specifically multiplayer, which of course is always life and death, in a virtual sense anyway.

When I first started multiplayer, you know, with people you don’t know from all around the world who could be serial killers, paedophiles or terrorists for all I knew, I found it a daunting experience. Most of the time I was being accused of camping (limp wristed I am not), which is to say, hiding behind objects such as cars or tanks, waiting for the enemy to stroll by and then nonchalantly shooting them in the head. Is that cheating? I think not. If I was thrown into a real war scenario and I hope to God that never happens and I was supposed to fight my way through a burned out urban sprawl, crawling with terrorists, I’d be hiding behind anything I could find or digging a hole in the ground with a spoon so that I could hide from them. It became such a perceived problem in online gaming that devs even brought out anti-cheat measures to grab the dastardly offenders red- handed. I no longer go multiplayer, mainly because I found the experience so anal in many ways, not to mention clique and my camping was oddly frowned upon in so many quarters, so it was their loss and my gain.But I digress yet again and I’d like to ask if you game for pleasure or pain?

Pain or pleasure? You see, no one buys a $60 triple A game title so that they can have their brains gouged out with a red hot poker do they? But sometimes that’s what it feels like when you’re trying to enjoy dying for the 500th time getting Lara, Faith or Gordon to jump the seemingly impossible chasm and not see the words YOU ARE DEAD or MISSION FAILED  burning through your monitor, with you reaching for the valium yet again. Another of my favourites is YOU FAILED TO COMPLETE THE MISSION as if if you were dragging your feet or still suckling at your mother’s breast for crying out loud. It’s no wonder gamers resort to their own imaginations and others’ hard work as walkthrough artists. Let’s get one thing straight: using walkthroughs IS NOT CHEATING, neither is it a crime as some of the gaming purists would have you believe.

Let’s imagine then, that you’ve just grabbed that AAA title off Steam, you’ve rushed home from work, your hands have gone all clammy and you’re itching to start flinging your hero about the screen with gay abandon.You manage to get through the first hour or so, the game gets a bit tricky and finally you’re faced with that seemingly impossible leap of faith, your hero decides to go all loopy, can’t make the jump and goes all kamikaze on you. This goes on for hours, days, maybe even weeks and your life begins to fall apart; your wife stops talking to you and takes up with the milkman and you eventually lose your job. Is that what you want? No, of course it’s not, so just use a walkthrough will you and save your marriage and your pets. Walkthroughs are everywhere and you don’t need me to tell you where to find them, although back in the day, we used to shell out for glossy mags with titles like Lara Croft: Special Edition, I kid you not. Well thumbed mind you.

In fact, that’s probably when I first dabbled in walkthroughs, when I was brain shatteringly stuck in Tomb Raider II. Alright, I felt a pang of guilt that lasted maybe thirty five seconds, but when I managed to heft Lara across that impossible jump, I at least avoided the inevitable brain hemorrhage waiting for me. And no, you don’t have to begin regular sessions with similar gamers, sit down in the group and say “My name’s John and I use walkthroughs….”. It’s socially acceptable now, up to a point……

I feel a big BUT coming along, possibly the size of The Empire State building or maybe even The Hoover Dam and yes, The United States of America is a very big place with lots of big things in it…….

BUT cheat codes, well. I have used them, I can’t lie to you about that, but frankly it’s just not cricket in my book. Remember when you were a kid and you saw those dodgy ads for X-ray glasses which promised you the world? They’d convince you that if you used them to look at the girls in school, you could see right through their underwear? I mean what fun is that for crying out loud? Unfortunately my mum wouldn’t get me a pair, my pocket money was pitiful to non-existent and besides, most of the girls at my school were scrubbers anyway except maybe one, but she didn’t fancy me. Cheat codes are the same. They give you that God-like sensation, you know, that initial burst of euphoria and a feeling of total domination like a modern day dictator, but you soon get tired of it, unlike dictators of course. There are times when you’re totally cornered, down to your last bullet and you might just as well be using a pea shooter for all it’s really worth, so maybe an all_ammo call can be excused as a one off. I know I’ve done it and lived to see more blood and was glad of it, else I’d still be there bleeding to death and being annihilated ad infinitum. 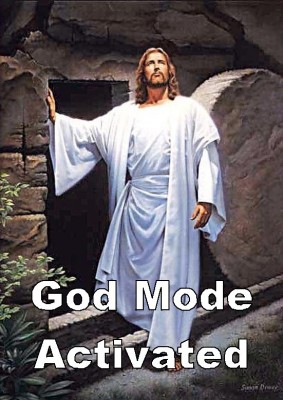 But God mode really is a cop-out don’t you think? I mean what fun could you possibly derive from wandering around a world that you own, wielding superhuman powers, where bullets and RPG’s have zero effect on your omnipotent person,where you actually walk through walls and not be seen? Oops hang on, we’re back to X-ray glasses again but I think you take my point and whilst many might disagree, actually playing God is a darn sight trickier than many think, so I’d rather be a foot soldier and sneak in the odd sleight of hand with give_all_weapons when my back is absolutely against the wall and live to see another day.

There are cheat codes aplenty. In fact, game devs build them into games as a back door, a fail safe if you like, maybe in case they get lawsuits from deranged gamers who lost their wives, pets and jobs and were caught in some never ending spiral until their eventual expiry date. Who knows? It may not be cricket to use cheat codes in my book, but let’s face it, modern games are not designed for you to play the game your way. Quite the reverse; you’re supposed to play the way the devs intended you to play, without save games and only with checkpoints. Imagine then that you are faced with a horde of seventeen zombies in need of your flesh and blood, that you simply have to eliminate in order to secure the zone and progress to the next level and you’re armed with nothing more than a small spanner. Let’s face it, you’re going to die and you’re going to die a lot, like maybe hundreds of times and you simply can’t save at some strategic point when the battle is going in your favour. When you die of course, you get dumped right back to where you started, where you don’t want to be and have to go through the same brain numbing experience for the 700th time. See what I mean?

What are you going to do? Call a friend? Ask the audience? Or pack up and go to the pub? I don’t think so buddy, because you’re a hardened veteran and a few pussy zombies aren’t going to spoil your day, so you’re faced with not many choices. Reset the game to EASY MODE, grab a walkthrough or invoke the cheat bible?

Which one would you choose?