I’ve been running Windows 8, almost exclusively, since the first (beta) release in September of last year. Despite my initial impressions (not favorable), I’ve made a 180 degree turn – I’m really into Win 8.

Despite the clunky Metro GUI, which I’ve managed to deal with by accepting it for what it is (and isn’t), and by acknowledging the fact that with a small amount of effort put into learning the navigation intricacies of this new OS, Windows 8 is “great.” I can assure you, that learning a few keyboard shortcuts necessary to take full advantage of Windows 8, was hardly the task that learning DOS 1 was, back in the day.

It’s true that the Windows 8 user interface is a radical departure from the traditional desktop GUI. With the navigation system designed with swiping features, slider menus, and so on, it’s obviously designed with Tablet PCs and Smartphones in mind. There’s no doubt – it certainly forces a readjustment in the comfort level of experienced Desktop users – there’s that learning thing again.

Users can, of course, choose to stand pat and resist evolutionary change, But, those who continue to brush this OS aside are making a mistake, in my view. Windows 8 has a lot to offer, including – vastly reduced boot time, blazingly fast application load time , a very small memory footprint, and considerably enhanced security over previous versions.

On top of all that though, Windows 8 includes a “killer feature” – PC Refresh. Or, as some Microsoft people have been known to call this feature – “push-button reset.”

Call me crazy if you like, but I’m a firm believer in reformatting and reinstalling my operating systems regularly. It’s a relatively easy task since I run multiple drives – each of which is partitioned for specific types of data storage.

Windows 8 has made this task somewhat easier. Windows 8 “push-button reset” will automatically reinstall Windows while at the same time – keeping all personal data, Metro style apps, and important system settings. This is not a perfect reinstall solution since pre-Windows 8 programs are not reinstalled. 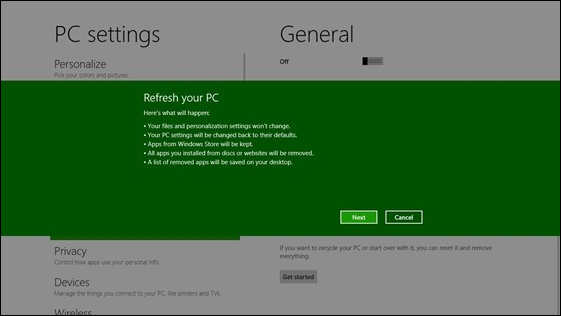 Those apps that are not reinstalled can be referenced in an HTML file which PC Refresh automatically saves to the desktop.

There’s little doubt that Win 8 advances computing technology in a number of very substantial ways, much beyond the few improvements I mentioned earlier. All-in-all, I’m glad I didn’t bounce this OS off my test system after 7 days – my first response to the Metro GUI.

But, the absence of the familiar Start Menu which allows for Shutdown/Restart commands, which has been shunted aside in favor of an ineffective barebones replacement (shown below), has cramped my style somewhat. 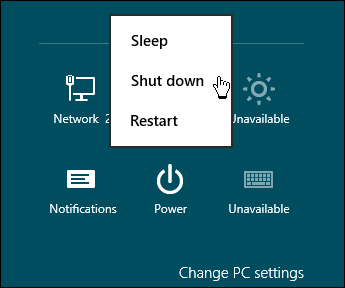 Working through 2/3 levels of menus to restart/shutdown is inefficient, so I’ve installed one of my all-time favorite utilities – Right-Click Extender Version 2 – which added a Restart and a Shutdown command to the Desktop context menu. Problem solved! Right-Click Extender has proven to be one of the most important free utilities (considering my style of computing), I’ve yet found. It can add amazing functionality to various right click context menus.

The “right click context menu” in Windows is a hidden gem. I know, you’re thinking – wait a minute, the right click context menu isn’t hidden, I use it all the time. And, I’ll bet you do. But, you might be surprised to learn, that if you were to ask an average user about this menu, the chances are pretty good that you’d get a blank look in return.

If you’re a power user and a fan of the right click context menu, then you’ll be interested in the Right-Click Extender Version 2 (released March 11, 2010)  from The Windows Club, which will add a bag full of additional context menu support  in the following categories – File/Folder, Desktop, Drives, and My Computer.

Following installation and execution of this free application, setting up and selecting the context menu items best suited to your needs is a snap – as the following series of screen shots shows. 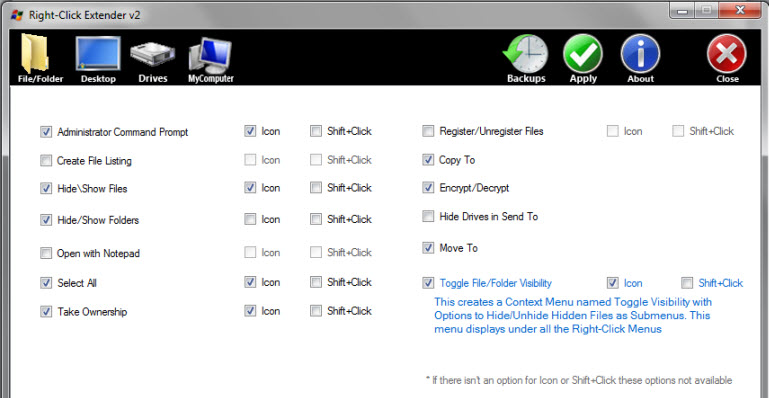 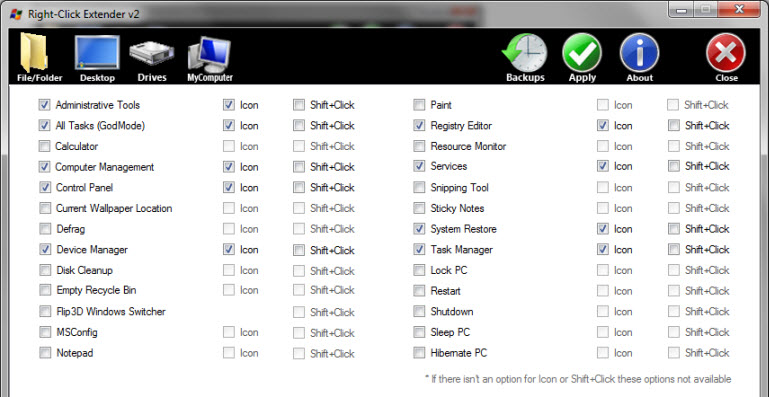 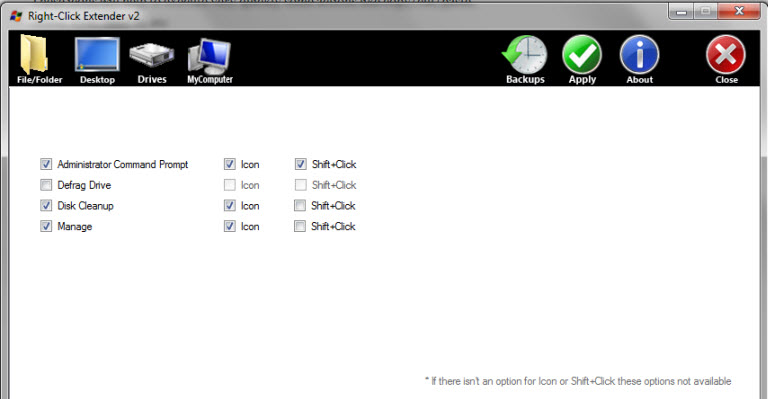 The following is an example, from my system, illustrating selective context menu items available to me on the Desktop following installation of the Right-Click Extender, Version 2.

The following is an example, from my system, illustrating selective Windows Explorer context menu items available to me, following installation of the Right-Click Extender Version 2. 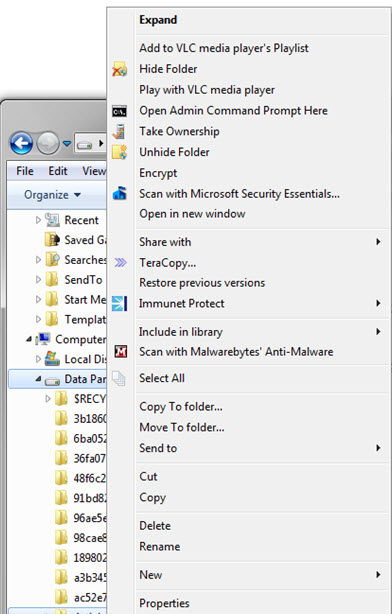 If the right click context menu is a tool you use frequently, Right-Click Extender Version 2 should help give a boost to your productivity.