I bet you were thinking the title of this article had something to do with the Presidential Election. Gotcha! It has nothing to do with either of the candidates. It is also not about who is superior– Males vs. Females in a “Battle of the Sexes”. We all know the answer to that. <Insert evil laugh> as I run to high five Judy Novotny, our DCT Apple aficionado.

Today, I taught a class on Windows 10 at the local library and had some folks in attendance that decided my class would be their Forum for debate. One man asked, “How is Windows 10 better than Mac OS Leopard?”

The question threw me for a total loop as I am a PC girl and own an Android smartphone. I was thinking to myself, “Where is Judy from DCT?”

Judy is our resident DCT Apple Goddess. I respect her knowledge and have gone to her before. When I am teaching, I never answer anything I know nothing about. I defer it to, “I can get back to you with the correct answer if you would like me to.”

This particular man claimed the Mac Operating System (OS) is better than Windows 10 or any PC OS that has ever been created. I was aware the other 23 people in the room were watching me intently, waiting for my response. I reminded him the class was about Windows 10 and was not a matter of a Mac vs PC preference. I asked him if he owned a PC and he stated his wife did. I stood my ground and did not get frazzled as I redirected his comment. A few minutes later another man in the class raised his hand and asked, “Macs boot faster than any PC, isn’t that so?”

I replied, “That depends on the PC and the hard drive as well as many other factors.”

I have a Solid State Drive (SSD) on this PC and plenty of RAM and an i7 processor so I can attest that my computer boots quickly. No one else in the class brought up Macs for the remainder of the class, for which I was thankful.

There’s nothing you can do to convince a hater that one is better than the other. I am not saying either man in my class was a hater, but there are plenty of haters out there when it comes to PCs vs Macs. Many ad campaigns out there will try to sway your belief by having sexy or studly actors/actresses pushing their wares. The ads I have seen show cool, young, hip people using Macs. I saw a Microsoft ad campaign a few years ago where Microsoft gave someone an amount of money, around $750, to buy a computer that suited their needs. If they could find one, they could keep it. The Mac user (a paid actor) sighs and ends up purchasing a PC and says sarcastically,  “I’m just not cool enough to be a Mac person.”

There’s nothing we can do about this volley going back and forth. We can do our part to un-snark (is that even a word?) things as far as we, the consumers, are concerned.

Chocolate & Vanilla… in a way 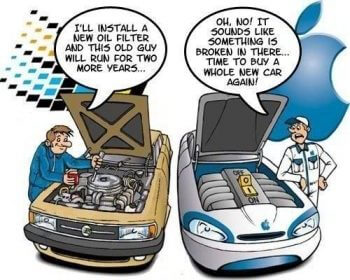 When people argue over Mac or PC, there are valid arguments for both sides. Every computer user has different needs so the argument can never come to a conclusion. Mac folks love the simplicity of their computers and the belief they have little to fear from security threats. I will not bash them for their beliefs. My two geeky sons are gamers and  are constantly adding new components and tweaking settings to play the latest games out there. They are both staunch PC enthusiasts due to the limitations with a Mac as you cannot upgrade most of the components in them. (Please correct me if I am wrong Mac folks.)

I have a Microsoft Zune MP3 player as well as an iPod Touch MP3 player that I acquired from my daughter. I love my Zune much more than the iPod Touch. I intensely dislike iTunes.

With that being said, it’s important to keep in mind that one does not need a reason for preferring Macs over PCs or vice versa. Sometimes, people just prefer one or the other, and that is perfectly valid. I am a very competitive person I might add, and a little competition between the two camps is not a bad thing. Competition is healthy and results in big wins for the consumer.

Let’s keep a healthy, respectful dialogue going about the best parts of our computers and sit back and watch as the two industry giants slowly start to listen to us, the consumers, and make improvements accordingly.

Remember, there is room for both MACs and PCs in the computing world

What are your thoughts folks?

7 thoughts on “Why Can’t We All Just Get Along?”