INTRO: This article was first published by Bill in March, 2010. However, the topic remains very relevant to this day, and the article is, of course, presented in Bill’s usual honest, sometimes irreverent, always entertaining fashion. Enjoy!

You give me your software for free as a marketing tool, with the hope of course, that I’ll upgrade to the commercial version of your application.

That’s cool, that’s smart, (it cost you nothing by the way) – nevertheless, I’m appreciative.

But you don’t stop with just the free use of your application, you piggyback a toolbar, or some other non-essential item, as part of the install package. Listen, I understand, you want to install a toolbar because you get paid by the toolbar developer. Even that’s OK – but you do it in such a sneaky way that it really p*sses me off, and that’s not OK.

Worse, if I don’t like your application and uninstall it, you open your Internet site, following the uninstall, using my Internet Browser – even if I don’t give you permission by allowing the connection. In my view, that’s a form of hacking. You need to take a refresher course in ethics.

I’ve been around the Internet for a few decades, so it’s not often I get caught in your schemes to install unwanted software on my machines, but less experienced users are often caught in your carefully laid traps.

Here’s a sample of the outrage a typical user, who got trapped by unethical behavior, feels – a comment on my site left by an outraged reader, several days ago, following her installation of Miro:

I thought I’d give this a try, since I watch Hulu quite a bit, and I’m sooo angry I did. Miro installed Bing Search toolbar, which I didn’t want or agree to install (using Firefox) and it wiped out all my default search engines for Firefox.

Now I’m trying to figure out how to get Firefox back to normal. Beware!!!!!!!! I don’t trust companies that install things without your consent or knowledge.

In this particular instance it’s true that the EULA covers this situation, but here’s the question. Why does an average user need to read a Eula in order to find an alternative installation solution?

An accusation of unethical behavior doesn’t begin to cover this case – sleazy; vulgar; dishonest; sordid; are much more appropriate.

You, the unethical developer, are not alone in attempting to profit by toolbar inclusion in freeware applications. More and more, high profile developers who offer a stripped down version of their commercial applications as freeware, are involving themselves in this highly questionable practice. 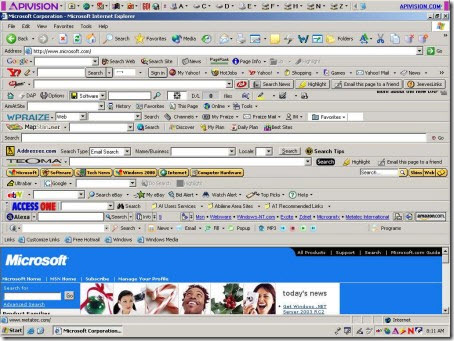 So here’s a question for the “ethical” freeware providers. How many toolbars do you think an average user needs? Ten? Twenty? Thirty………….. Just so you know, a Google search for “toolbar”, returns 167 Million results!

I can already hear your answer “ but the user can uncheck the appropriate box when installing the application”. Right! Unless you’re detached from the real world (and, you may well be), you’re more than aware that a typical user does not uncheck this box. Then, over time, the user is at a loss to explain why their machine has slowed to a crawl.

Could it be because your toolbar, along with twenty others, all installed in a furtive way, become active at startup – ya think!!

So, just stop with the crapware already. If you’re p*ssing me off, just consider what you’re doing to an average user.

EPILOGUE: Well said Bill. Anyone who deals with ‘fixing’ other peoples computers, whether it be in hobby mode or on a professional basis, will be well aware of the havoc reeked among the huge band of ‘average’ users by these ubiquitous and mostly uninvited toolbars. I am endlessly amazed when opening the browser on a client’s machine only to see up to half the screen real estate shanghaied by toolbars. When I ask my clients if they use any of these toolbars the answer is invariably no… and most have no idea how they got there.

8 thoughts on “We don’t want your rotten toolbar!”