With SSDs (Solid State Drives) remaining a little on on the expensive side, especially when compared to traditional hard drives on a per gig cost basis, most users who have migrated to SSD generally tend to opt for one of the lower capacity SSDs as the system drive alongside a high capacity traditional hard drive for data storage. However, laptop owners are not afforded that luxury and are generally stuck with either one or the other. It’s little wonder then that hard drive manufacturers continue searching for an affordable and viable solution, especially where limited internal space is involved.

Some time back we reported that Seagate had released a hybrid SSD/HDD combination drive here: Seagate SSHD Hybrid Drives combine speed + large capacity + affordability. While the system of combining 8GB NAND flash with a standard hard drive helps overcome the space issue and is also cost effective, any appreciable gains in performance would be arguably negligible, certainly nowhere near what the separate SSD/HDD combination has to offer.

Western Digital has recently come up with an interesting alternative, combining a 120GB SSD piggy-backed onto a 1TB 5400RPM hard drive in one single 2.5″  form factor unit. This is not a hybrid drive but rather two completely separate drives which appear as two separate volumes. The WD Black Dual-Drive certainly appears to effectively overcome space restrictions while still offering the sort of increased performance levels one would expect. Although, somewhat disappointingly, it does not include any caching support, which, given the amount of available NAND, seems a rather strange decision. 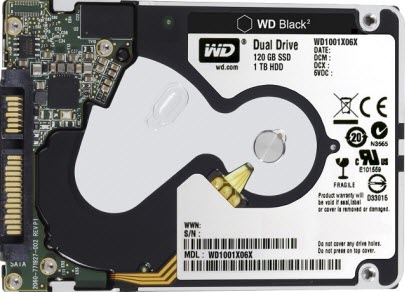 The current recommended retail price tag of $300.00us has also come under scrutiny with many tech writers saying it it too expensive. By my calculations, the cost comes in at around 4 cents more per gig than if similar 120GB SSD and 1TB hard drives were purchased separately. I suspect that will not present too much of a deterrent for many laptop owners who are looking to maximize storage space while still gaining the performance advantages provided by SSD technology.

To me, the WD Black Dual-Drive does appear to represent a realistic compromise for laptop owners. The cheapest large capacity SSD I know of, the Crucial M500 960GB comes in at around $600.00, which amounts to double the price for slightly less total capacity. While I realize that is for total SSD, it’s still a lot of money to outlay just for a hard drive. Plus, if these new dual drives do happen to create a demand, the price is likely to come down.