This is no joke folks, the latest protection for USB connected devices is actually called a USB Condom. While not exactly resembling a real condom, you have to admit that the name choice was bound to create a fair amount of attention – clever marketing? Even the manufacturers admit that the name started off as a bit of a joke: 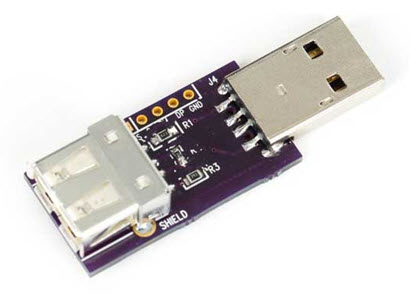 USBCondoms started off mostly as a joke, but addresses a very real operational need (which strangely wasn’t already addressed). Which is, the need to restrict data (and not power) in USB cables. In this way computers and other USB ports can be used only for their power without accidental data sync or the potential for malicious attacks. USB Condoms can also act as a “protective barrier” when charging devices in public/unknown charging stations.

The USB Condom is a small and unobtrusive dongle that sits between the device and any untrusted USB port, allowing the device to be recharged without fear of data being stolen or the device infected with malware. It works by electronically disabling the connector’s data pins, which effectively converts the USB cable into charge-only, thereby preventing data from being transferred to or from the device.

USB Condoms are available in three different sizes; jumbo, normal, and wee – just kidding, they are actually Type A, Mini B, and Micro B, at $9.99us each (discounts for bulk purchases apply).

3 thoughts on “USB Condoms: The Latest Protection for Devices”