World of Warcraft: Mists of Pandaria, the fourth expansion to the popular MMORPG World of Warcraft, hits shelves on September 25, 2012.  But the world will change on August 28th.   If you are looking for a guide to tell you about all the upcoming changes, from the new Pet Battle system (think Pokemon), to class changes and spells, there are hundreds of guides online.   This is not one of those guides.  Instead, this article is going to let you know what to expect in the coming month.

First, I want to say that I’m not a gamer.  Working in the Tech Support field, I know lots of gamers.  The gamers I know tend to jump from game to game, playing only a few chosen titles regularly, but sampling many.

I am a World of Warcraft player.

Since the second expansion, The Burning Crusade,  I’ve been a Raid Leader and a Guild Leader.   I have been dedicated (addicted?) to this MMORPG for 6 years, have 8 level 85 characters all with raid-level gear, and raid in every role. While most people know this is only a game, there are many skills some players have in common with Corporate HR departments.  For example, just try getting 25 people to show up for for something (a raid) on-time; and then keep these players focused on the strategies that enable a raid to down a Boss, all the while managing member relationships, interruptions, breaks, and training new members about the strategies we use.  That’s some skillset.

World of Warcraft reigned virtually undisputed as king of MMORPGs for years until being dethroned by League of Legends, and later Diablo III, as a result of recent drops in membership (currently down to around 9 million registered players); but a drop is not uncommon at the end of an expansion cycle, especially considering the  wild popularity of Diablo III and Starcraft II.  Simply put, very few MMORPGs have the player base and major infrastructure requirements that Blizzard Entertainment gets to manage.  For example, it costs Blizzard over $100k per month to maintain the infrastructure, including the following from a 2009 Data Center Knowledge article:

Sure, there are lots of other MMORPG’s, many free to play, that have the newer features which Blizzard seems slow to employ.  But in International Business class, I learned that the United States sales market is considered a protected market, and often new products of all kinds are tested elsewhere around the world before being introduced into the U.S. market.  So it is true with World of Warcraft.   Blizzard isn’t going to adopt some new feature just because it is cool.  Instead, they will wait to see how the feature pans out, and if suitable, later incorporates a similar feature.

Okay – so what should I expect (besides Pandas)?  [youtube]http://www.youtube.com/watch?v=wvYXoyxLv64[/youtube]

Generally, all your favorite add-ons will be broken.  Well, perhaps not all, this time.  Blizzard hosted an unprecedented beta programs for Mists of Pandaria, first reaching out to add-on developers, and later opening up the beta program to hundreds of thousands of players.  So some of these add-ons may have had the major bugs worked out.   Still, I do not expect all my add-ons to work on patch day, and will be taking some steps to prepare.

With the world upgrade, the “Transition”, or lead-in, scenarios will be in place for a once in a World of Warcraft lifetime event.  Prior to the second expansion, Wrath of the Lich King, huge flying fortresses appeared over various zones, and players needed to team up to defeat top-level undead minions.   Prior to the current expansion, Cataclysm, players got to participate in the attempts to restore the home cities of the Gnomes (Alliance) and Trolls (Horde).  Also, for a solid week, Elemental forces invaded major cities every few hours.   When the event began, lower level players were forced to evacuate the major cities or be killed.  These level 80 elite enemies could not be solo’d, and players quickly formed ad-hoc raid groups to beat back these forces. Halfway through the week, I remember hearing players complaining that they were already tired of these invasions.  Not me.  I knew that the week would come and go, and we would never again experience attacks on the cities in this manner. 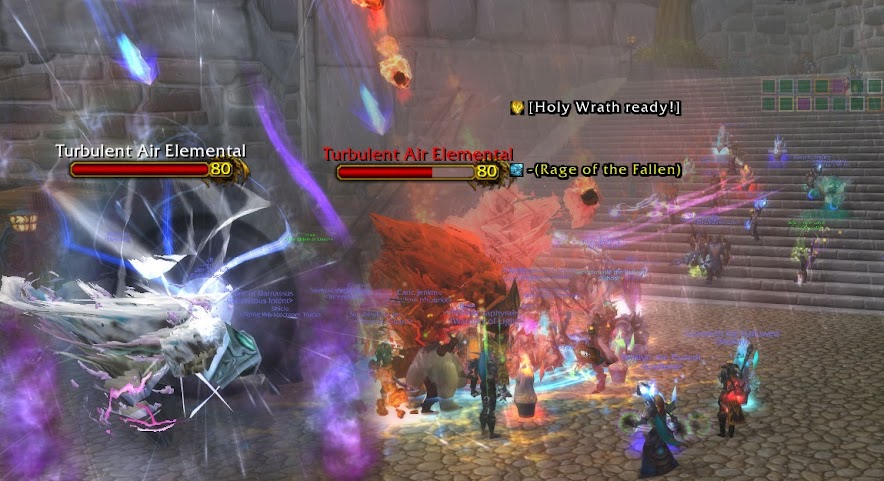 The transition scenario for Mists of Pandaria….has yet to be officially announced.   But with only 4 weeks until the expansion goes live, we should be hearing the official word anytime now.  We do know that in Mists, the Horde will have overtaken one of the Alliance’ major cities (outside of home cities), Theramore, home to one of the Alliance’ most popular characters, Jaina Proudmoore.  It is suspected that the next transition event will feature the fall of Theramore.

This major change has polarized many players, and heats up the division and hostility between the Alliance and Horde.  And Blizzard must be happy about that.  No other MMORPG has remained popular for so long, and Blizzard is in uncharted territory when it comes to finding a new direction for its’ players.  We’ve heard developers at conferences suggesting that the long term future of this, or any other long-lived MMORPG, will depend heavily on the Player-vs-Player aspects of the game, and the fall of Theramore does much to refocus players to the more PvP-centric aspects of the new zones.

Speaking of new features, Blizzard also recently announced that the premium features of the Mobile Armory app for Android™, iPhone®, or iPod® touch is now completely free.  You can now buy and sell on the Auction House, or chat with your Guildmates no  matter where you are.  (And as a raid leader, it would be great for a player who is running late to get on the app to let us know, instead of risking life and limb to get home.)

Pre-orders for World of Warcraft: Mists of Pandaria are available just about everywhere games are sold.  If you are looking to return, Blizzard has the Scroll of Resurrection feature, which gives both returning players and the current players added benefits.  So contact someone you know who still plays (hint, hint) and ask them to send you a Scroll of Ressurection.  Or, if you’re new to World of Warcraft, you can also contact a friend who plays and take advantage of the Recruit a Friend features. After your free trial, you’ll need to pick up the original game as well as each expansion, which  has typically been expensive; but there is a sale on right now which will let you pick up all the required titles for only $20.  Hurry, that offer ends Monday, August 27th.

So, while the expansion is looming ever closer, there will still be a lot to enjoy over the next month, some of which will never be experienced again.

Then, on September 25th, the new client launches, and again our add-ons will be broken.  Don’t worry, the developers will fix them.  We’ll get to experience new events, many new features, and many players will return.   Will Mists follow in its’ predecessors footsteps and set new sales records?  Will a more PvP-centric system resurrect this aging Titan of an MMORPG?  Will mages ever stop QQ’ing when they get nerfed during the next round of class balancing?  Join me and find out.

Soon after, we’ll see if this latest expansion allows Blizzard to move ahead with their long put-off live action movie.

Either way, 15 dollars a month is a real bargain for all the hours of enjoyment I’ve experienced over the years, and I am looking forward to the new adventure, and to see where Blizzard will take us next. See you in-game.