One term you hear quite often is Broadband. Internet Service Providers throw the term around like it is the magic wand of internet happiness! Those who don’t have it want it, those who do have it love it.

Internet service is generally broken down into two segments:

I’ve had broadband over seven years. I’m lucky enough to be in an area where it is available. Not everyone is as fortunate. Why doesn’t everyone have access to broadband?

So what is “The Big Picture”?

To put it simply broadband access to the internet is important not only to individuals, but to the growth and wealth of entire countries! Looking at information available from the Organization for Economic Co-operation and Development(OECD) we can see striking similarities between broadband access and the profitability of a country.

This graph shows the number of people per 100 residents who have access to broadband, and which technology they are using for access, by country. 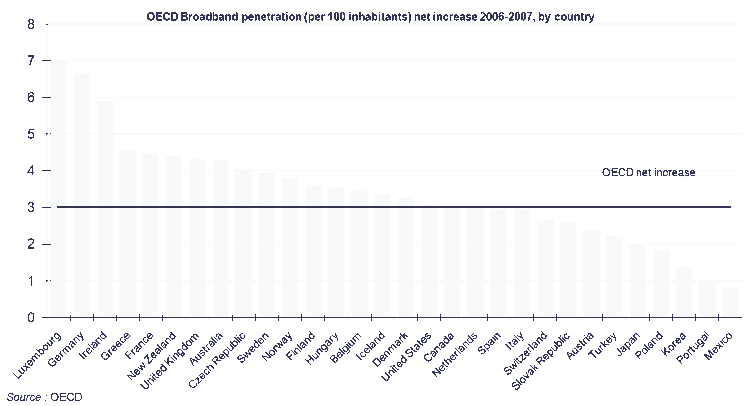 Looking at the previous two graphs one might assume that countries with better broadband access have residents who mostly live in large cities, or have a high density of population. This is not necessarily the case! The red line indicates population density for each country, while the blue bars show broadband penetration.

Clearly Iceland, Finland, and Canada have low population densities, but better access to broadband than countries such as the United States – Birthplace of the Internet, Australia, Japan, etc. 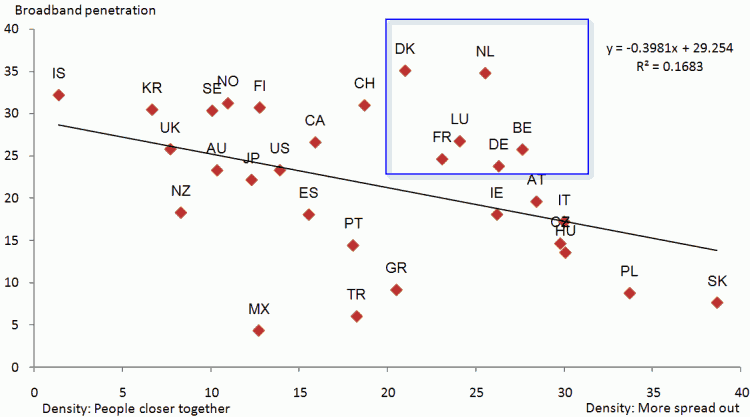 Well that didn’t clear anything up. We still see the same countries at the top of the list. Let’s look at cost to the subscriber by country. 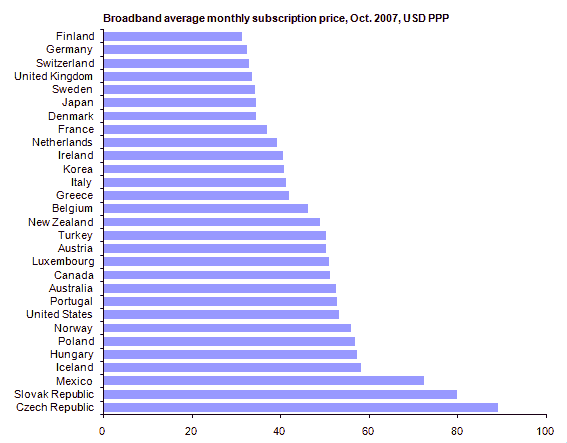 So where am I going with this? I used the information above to show that:

So what does this mean?

Notice the red line (indicating GDP) generally follows the broadband graph? Many would say broadband is related to GDP and countries with a low GDP can’t afford to roll out broadband internet to it’s citizens. I see this differently. Look to the countries with the highest broadband penetration on the left of the graph. I see these countries as being "ahead of the game". They are smart enough to realize the internet opens many doors for their country, both financial and social.

While it may be true that a financial wealthy country may have higher broadband penetration – I argue that higher broadband penetration is required for a financially wealthy country! I see Denmark, The Netherlands, Iceland, Switzerland, Finland, Korea, and Sweden as leaders. Their countries realize the importance of technology to their country, and will benefit from this decision in the future.

Better, faster, access to the internet leads to job growth – plain and simple! Look at companies such as Google, Amazon, Facebook, Ebay, and Microsoft. Each company has experienced huge growth as a direct result of better internet access to the citizens.

Why should you care?

Here in the U.S. Comcast, one of the larger nationwide providers, recently announced 250GB bandwidth limits. Time Warner, another leading provider, is discussing tiered pricing for both speed and consumption. Both actions will further slow broadband growth and use.

While 250GB may seem like a lot, consider a family of 4. Dad works from home, via the internet. Mom searches for recipes and chats with her grown children across the country. The 2 children at home love to play their friends on their Wii, Xbox, or Playstation. The whole family has "movie nights" on Friday and Saturday, where they download a movie through one of the various internet movie services. Now they are forced to cut back on their entertainment (movies, games, online videos) so Dad can continue to work from home and not have to pay additional money the family doesn’t have.

The "kicker" in all of this? Both companies advertised the service as unlimited!

The internet has become more of a necessary utility, like electricity and heat, than a "nice to have" entertainment feature. It benefits us in many ways, both economically and socially. Imagine the gas and energy saved by each person who works from home, or by downloading a movie from Netflix instead of driving to a video rental store. Governments need to realize the internet is an important piece of a country’s economic pie and act as such.

Just this week in the U.S. Congress took the first step with the Broadband Data Improvement Act, which will force government agencies to better track internet access and costs. Hopefully it won’t be the last step.