Revo Uninstaller has been top dog in its genre for quite some time now, mention free uninstaller software and Revo will get the nod more often than not. Just lately I’ve been coming across more and more favorable comments regarding a relatively new contender on the scene called Geek Uninstaller.

One of the aspects which has added hugely to Revo’s popularity is its ability to identify and remove leftover bits and pieces which traditional uninstalls tend to leave behind. According to editorial reviews and user comments this is also an area where Geek Uninstaller excels. So, I decided to put them to the test and see which software does the better job – Revo Uninstaller or Geek Uninstaller.

The Test: Uninstall programs using the latest versions of Revo Portable and Geek Uninstaller (also portable), then manually check for any leftover files and registry entries.

The Methodology: Create a full system image so that both applications share the identical starting point. Uninstall three programs using Revo Uninstaller and perform the check. Restore the image and go through the identical uninstalls using Geek Uninstaller, do the check again and make the comparisons.

The three programs I chose to uninstall were all ones I’ve been utilizing for some time, so that AppData and other subsidiary items would come into play: a light application called HD Tune, a medium application called Flipping PDF Reader, and a slightly deeper application – my default image viewer FastStone. Both Revo and Geek include advanced uninstall options, in both cases I used the normal default mode. 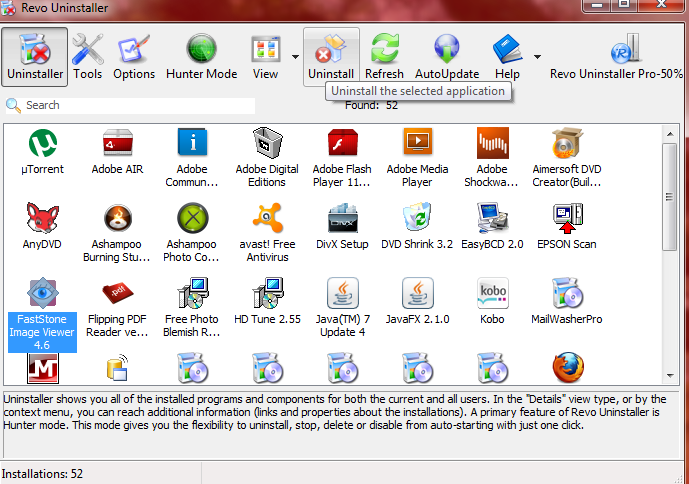 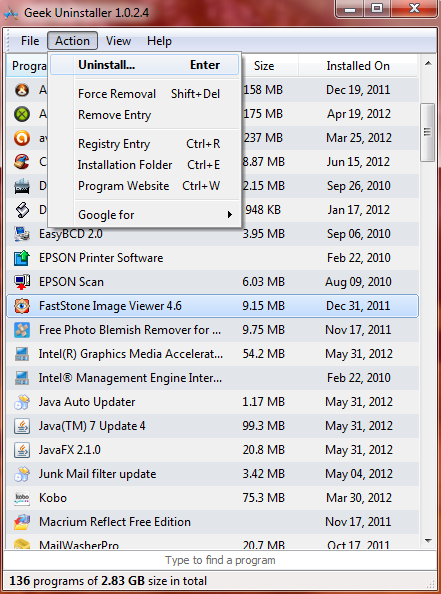 The results: Both uninstallers did a great job of removing programs and leftover items, Revo came out slightly ahead in the registry department. As expected, FastStone Image Viewer involved more registry entries to start off with – Geek Uninstaller failed to remove 6 registry items, mostly relating to file associations, Revo Uninstaller left behind just two. Everything else was pretty much on par:

Note the big variance in the numbers of installed programs reported by each application at bottom left of the screenshots – Revo: 52 and Geek: 136. That’s partly because Geek includes Windows Updates which Revo hides by default, but also because Revo Uninstaller free does not recognize or list 64-bit programs whereas Geek Uninstaller does. So, for anyone running a 64-bit system, Revo is pretty much a non-starter

Conclusions: For 32-bit systems: Either will do a great job but Revo still holds the upper hand, just. There’s a lot to like about Geek Uninstaller but when it comes to complete removal, Revo maintains a slight edge in the registry department. Also, for less experienced users, Revo’s default behavior is to create a new restore point prior to each and every uninstall operation, no such automatic option is available in Geek Uninstaller.