It amuses me no end whenever I come across rants aimed at the evil Microsoft. I doubt there is another organization that has been as much maligned or the subject of as many conspiracy theories as Microsoft. Money hungry, uncaring and dictatorial are just some of the common barbs thrown Microsoft’s way. I tend to take it all with a grain of salt, there are glass-half-empty people and then there are glass-half-full people.

While I firmly believe the pluses outweigh the minuses overall, there is no doubt that Microsoft has dropped plenty of clangers along the way, who remembers “Clippy”, the much maligned Office assistant?  First introduced in Office 98, Clippy must be one of the most reviled innovations of all time. The mere mention of the name elicited levels of hatred generally reserved for jilted lovers and mortal enemies. There were “I hate Clippy” Web sites, videos, and T-shirts in numerous languages. One of the first viral videos on the Internet, well before YouTube made posting videos commonplace, depicted a person mangling a live version of Clippy, screaming, “I hate you, you lousy paper clip!” 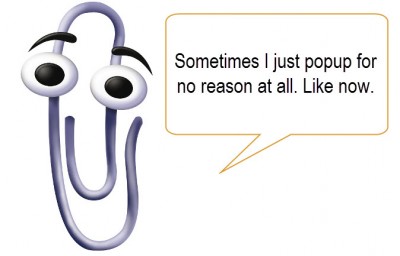 Then there was that annoying little dog associated with XP’s snail-like search feature. I lost count of the number of hours I sat there watching that little dog’s tail wag while waiting what seemed an eternity for the search to complete. I guess Microsoft figured anything so painfully slow required some kind of distraction. Good choice Microsoft – entertainment value zero, irritation level off the scale. 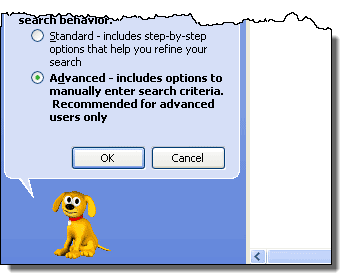 Then along came Vista, the operating system everyone loved to hate. I don’t actually see Vista as the disaster depicted by so many, more as a progression – the path to the excellent Windows 7. One of the main criticisms leveled at Vista was its additional demands on resources and the need to update hardware in order to accommodate it. To a certain extent Vista was the victim of unfortunate timing, pretty much coinciding with the birth of a period of massive advancements in hardware technology – dual/quad core CPUs, mega RAM, and large capacity hard drives all eventually becoming the norm. I wonder; if Vista were to be released today, would those same issues still be relevant.

So, on to Windows 8 and it’s here that I concede Microsoft has lived up to at least two of the most common criticisms. Don’t get me wrong, I’m not talking about the operating system itself, I really like Windows 8. The missing Start Menu, the new Start Screen, live Tiles, all those elements people have complained about, as far as I am concerned it is all inconsequential, at the core Windows 8 is a darn good operating system.

Where Microsoft’s attitude has sucked is in the area of updates and distribution. In my opinion, this aspect has indeed been handled in an uncaring and dictatorial manner. How many Windows 8 users experienced issues trying to upgrade to Windows 8.1? Too many! Through no fault of their own. Indeed, there are reports from a significant number of users who still have not managed to complete the upgrade. The only solutions I’ve come across have been provided by tech sites, not Microsoft. I appreciate that the multitude of differing hardware and software configurations make diagnosis difficult but when issues

arise on such a scale, surely Microsoft should set up a specific support forum with trained staff at the ready. It’s called customer service, or PR, or just doing the right thing! Strike 1.

The upgrade to Windows 8.1 was delivered via download from the Store, no ISO has ever been made available. Among other issues, this decision forced users running multiple Windows 8 installations to download the 3+GB upgrade multiple times. Every Windows operating system should be available via downloadable ISO, this was an unfathomable and awful decision from Microsoft. Strike 2.

Now, with Windows 8.1 Update 1, Microsoft has adopted the position of standover merchant. For those unfamiliar with the term – a standover merchant is someone who bullies or intimidates. Microsoft’s decision to stop providing updates for Windows 8.1 users who do not install Update 1 is tantamount to blackmail. It does make sense too install Update 1 but that is not the point, this  ‘or else’ attitude is the epitome of dictatorial. Strike 3, you’re out!

I am by no means a Microsoft basher, I fully appreciate what the company has done for personal computing and its massive contribution toward today’s technology. However, these recent decisions regarding Windows 8/8.1 go beyond the pale. Microsoft has made a fortune off the backs of millions of Windows users, more than enough to afford the kind of customer service and support we all deserve. This is one area where Microsoft definitely needs to lift its game.

18 thoughts on “Microsoft Windows – The Good, The Bad, & The Very Ugly”