First off I have to say that I really like Windows 10. In my humble opinion it is the best Windows operating system yet and a vast improvement over Windows 8 and 8.1. However, the one aspect which represents a backward step is Windows Update. While I can appreciate and understand why Microsoft would want as many users as possible on the same page, their effort to manage updates on our behalf has proven to be a dismal failure.

Considering the multitude of different hardware and software configurations involved, how can Microsoft possibly guarantee that all updates will work fine in all systems? Simple answer, they can’t. Even the supposed early warning system Microsoft put in place, known as the Insider Program, has proven to be ineffective. So, the combination of forced updates plus extremely limited user options means that recalcitrant updates, while admittedly occasional, are all but impossible to avoid.

Problem #1: Windows Update is like a box of chocolates

If forced updates were restricted to security patches only, that would be a different matter. However, Microsoft is forcing all kinds of updates on users, including a mishmash of patches, fixes, UI changes, and new features. To add fuel to the fire, Microsoft has also all but stopped providing useful information about what each update does, which only exacerbates the situation.


THE FIX: If Microsoft is not prepared to relent on its forced updates policy then they need to get back to providing proper, useful details about what each update is for.

Users who are confronted with an update error code, generally accompanied by an equally generic message, will usually need to resort to searching the error code online and then wading through long, patience testing forum threads where the the majority of posts are reporting similar issues rather than presenting any worthwhile solutions.  Even when assistance is offered, it’s normally in the form of the same old, generally useless advice to “try rebooting, uninstalling the anti-virus, updating drivers, etc.”

The only other option for users is to delve into that indecipherable collection of hieroglyphics known as logfiles. Even Microsoft MVPs generally have no clue what those complex strings are alluding to. What hope do we mere mortals have.

So an update fails… but wait… it will try again, and again, and again, in a never ending cycle of failed installs and reboots. Surely this is not the way it should be. It’s certainly not the way users want it to be and probably not what Microsoft had in mind either. However, it’s just one result of forcing automatic updates on users and not providing them with the necessary management options to prevent this from occurring.

During a recent visit to my youngest daughter and her family I was attempting to help them solve an issue with their home wifi, but, each time I  booted up my laptop, Windows 10 would immediately start downloading a slew of updates, using almost all the bandwidth and totally messing up the diagnostic process.

THE FIX: Go back to providing users with options to manage updates for themselves: 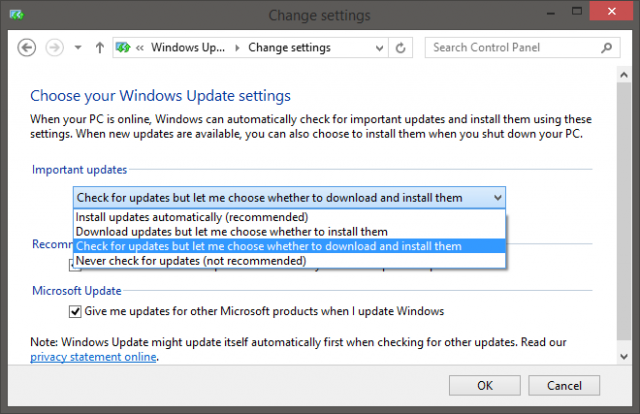 To me, the above list of options, or something like it, provides the perfect solution for all levels of user proficiency. There’s nothing wrong with admitting a mistake and reverting to a proven system. How about something like:

How to Disable Windows Update

In the case of diagnosing my daughter’s Wi-fi issue, as mentioned earlier, I ended up stopping and disabling the Windows Update service in order to prevent the automatic downloads from interfering. It’s not the first time I’ve needed to disable the Windows Update service and probably won’t be the last. It’s not something I’d generally recommend but, when circumstances dictate, it does the job.

Click the Start button and type “services“, then click on Services at the top of the results: 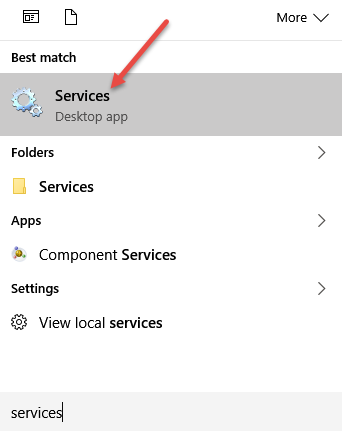 In the Services screen, scroll down to Windows Update and double click it. This will open up a separate Properties window. First, click Stop, and when the service has been stopped, change the status to Disabled: 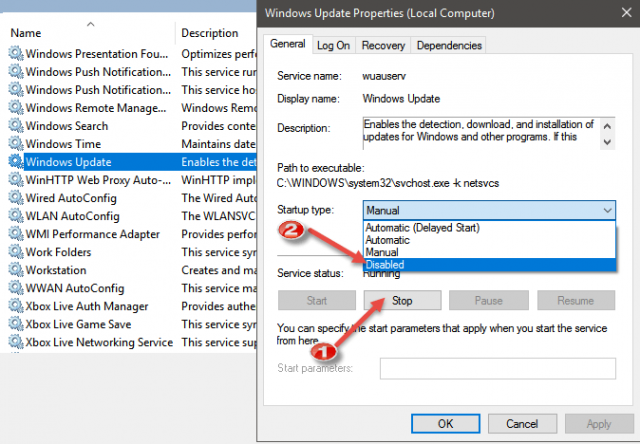 Click Apply then OK to close out. Don’t forget to set the service back to its default status when you’re ready. I’ve read where some users implement a similar system to at least gain some measure of control over updates but, as I said earlier, it’s not something I would generally recommend.

Hopefully, Microsoft will eventually realize that managing updates for everyone is pretty much mission impossible and backtrack on its decision to force updates with extremely limited options for users. However, I won’t be holding my breath.